Scientific supervisor of the club – Associate Professor of the Department of Ophthalmology, PhD, Inna Skrypnychenko. 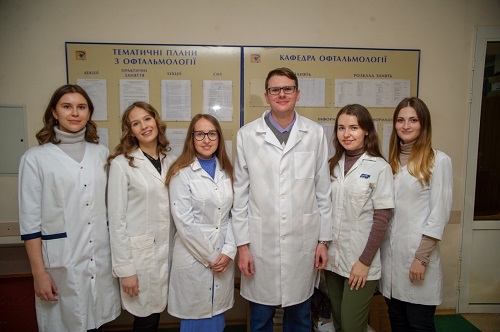 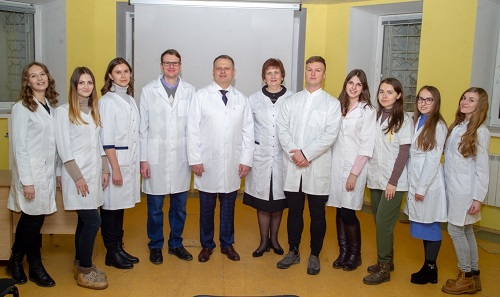 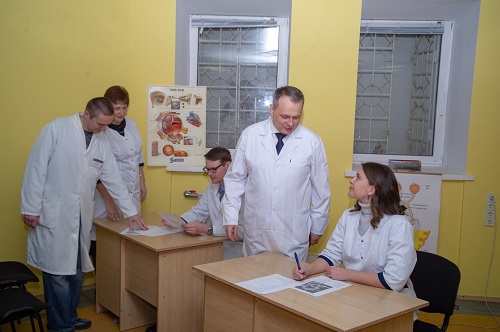 Meetings are held on Wednesdays or Thursdays at 16.00 at the Department of Ophthalmology at Kyiv City Clinical Hospital No. 9 (Rizhska St., 1, 6th floor, training room).

Current information about the club of the Department of Ophthalmology is present in social networks and on the website of Kusil Scientific society:

The student scientific club of the Department of Ophthalmology was organized in 1934 by Professor M.O. Leviticus. The first executives were associate professor V.A. Kramarevsky and Associate Professor I.A. Korenevich. In the pre-war years 5-8 students participated in it. The main activity of the students’ scientific club during this period was the development of diagnostic and therapeutic methods, clinical analysis of patients. In the post-war period, in the 1950s and 1960s, the department was headed by Professor V.N. Arkhangelsk (1944-1953) and Professor P.S.Plitas (1954-1966), 8-12 students constantly were engaged in student scientific club. In addition to improving ophthalmic training, students have conducted extensive research, that were devoted mainly to the issues of ocular traumatism, histological changes of the membranes of the eye in inflammatory diseases, ultrasound diagnostics in ophthalmology. Professor T.V.Shlopak, who had headed the department in 1966-1983, improved the work of the students’ scientific club. The club included 12-20 students annually. Students’ scientific works were devoted to topical issues of diagnostics and treatment of glaucoma, studying the activity of metalloenzymes, conservative treatment of cataracts, questions of introduction of microsurgical equipment in the surgical treatment of ophthalmic patients. Students regularly participated in local scientific conferences. Considering the traditions and importance of this form of education for the formation of future scientists and ophthalmologists, much attention was paid to the work of the student scientific club by corresponding member of NAMS of Ukraine, Professor G.D.Zhaboiedov, who was head the Department of Ophthalmology since 1984 to 2013 and Professor O.P. Vitovska (2014-2019).

Scientific supervisors of the club, in addition to associate professors V.A.Kramarevsky and I.A. Korenevich, were:Associate Professors L.L. Ustimenko, I.P. Chuistova, T.S.Kurilina, L.A.Sedoy, G.O.Todor, Assistant V.V.Kireev. Nowadays the student scientific club is headed by Associate Professor I.D. Skrypnychenko. Up to 20 students are involved in the group annually. The meetings are held at the Department of Ophthalmology at Kyiv City Clinical Hospital No.9 and at the Department of Ophthalmology at Oleksandrivska Clinical Hospital in Kyiv. Students learn diagnostic and therapeutic methods, take part in clinical analysis of patients, take an active part in urgent duty at the department’s clinics and at the emergency room, and are engaged in scientific work. Club’s scientific works are devoted to diagnostics and treatment of diseases of the retina and optic nerve diseases, topical issues of glaucoma, modern problems of inflammatory diseases of the eye, damage to the eye, and use of laser methods of treatment in ophthalmology. International Scientific Practical Conferences of Students and Young Scientists “AnnualYoung Medical Scientists’ Conference” (AYMSConf) and “Special issues of diagnostics and treatment of diseases of otorhinolaryngology organs, craniofacial area and eye” are held annually at the department. Students annually represent NMU at conferences in other cities of Ukraine (Vinnytsia, Chernivtsi, Uzhgorod, Odesa, Lviv, Dnipro). They participate in the All-Ukrainian Olympics in Ophthalmology.The winners were: Oliynyk Y., Venedikova A., Nishchik A., Antonenko O., Shevchik A., Kotova Y., Kovalchuk H., Shulga I., Peleshok N.).