History of the neurology department of Bogomolets National Medical University is the history of Ukrainian neurology.

They say “Memory is the only paradise from which we cannot be drawn out”. And they rightly say. It is confirmed by a centenary history of the neurology department staff of BogomoletsNational Medical University.

Before the formation of an independent department within a medical faculty of Saint Volodymyr Kyiv University there were red some lectures on neurological diseases. Since 1855 the head of the clinical therapy department professor V.S. Pokrovsky consistently red the lectures. He and followers of S.P. Botkin were the most acquainted with a stomatoneurology, neuropathology and psychopathology.

A new stage in the teaching of neurology was a foundation in 1884 the united department of nervous and mental diseases, headed by professor I.O. Sikorsky. He is associated with the beginning of teaching of neurology diseases as independent medical discipline at the medical faculty of Kiev University. He engaged in teaching of different sections of neurology the group of scientists, among which distinguished themselves by good clinical training M.M.Lapinsky and privat-docent V.V.Seletsky. Professor I.O.Sikorsky gave the students a course of general pathology and treatment of neurological diseases.

Also noteworthy are the first and last lectures red by professor I.O. Sikorsky for the students of the medical faculty of St. Vladimir University in 1896, “The first and last day of the student’s clinical training.” As a superior colleague he gives guidance to future doctors that are relevant even today: “Medical profession exalts man, uprear the noblest moral qualities – the habit of tireless work, generosity, empathy, the ability to maintain the greatness of spirit among misfortunes. It requires special professional virtues. “

The department history is closely connected with the history of nervous diseases clinic of a medical faculty of Kyiv university, which was then based in the Alexander Hospital (now it is a Central Clinical Hospital in Kyiv) and occupied two barracks (made of stone and wood), designed for 60 beds. For lectures and practical exercises there were used a separate barrack, where were located two laboratories: pathohistological and the laboratory for study of cerebrospinal fluid. The Scientific life of clinics was represented in clinical conferences and meetings of neurological societies. The school of M.M. Lapinsky followed by famous neurologists, professors B.M. Man’kivsky, O.R. Kyrychyns’ky and V.G. Lazarev.

In 1933 there was established the department of nervous diseases of a treatment faculty the head of which was B.M. Man’kivsky until 1962. The first his assistants were Y.V. Vasylenko, V.M. Solomins’ka, V.L. Beder, L.I. Cherni. Later the assistants of the department were T.I. Donchak, Z.M. Drachova, E.G. Zagorovs’ky, M.P. Kyrinna, V.M. Mezhybors’ka, N.V. Pen’ok. 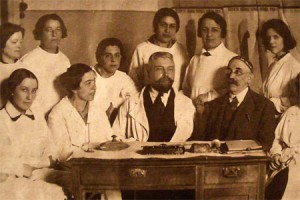 During his long scientific career (1922-1962 yy.) the academician B.M. Man’kivsky made a significant contribution to the various aspects of clinical neurology. A great number of his scientific works were the first publications in domestic and world literature, which reflected the priority of national science. He proposed a classification of the nervous system infectious diseases, studied into the matter a multiple sclerosis and disseminated encephalomyelitis, was the first one who described the pineal body tumor and Rathke’s pouch (a craniopharyngioma) and developed methods for their treatment. B.M. Man’kivsky explained the mechanisms of many symptoms onset in myasthenia, paroxysmal myoplegia and facial hemiatrophy, studied the etiology and pathogenesis of dermatomyositis and other types of collagenoses. 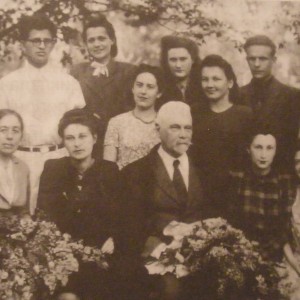 A significant period of time of the nervous diseases department (1969-1992 yy.) is associated with a Honored Worker of Higher School of Ukraine professor O.A.Yarosh – a student of Professor D.I.Panchenko. His scientific works were dedicated to the peripheral nervous system diseases, cerebrovascular diseases, multiple sclerosis diseases and to the nervous system disturbance by an alcoholism, influenza. He was the first supervisor of the National Center of Multiple Sclerosis founded by him in 1979 on the bases of department’s clinic. At that times on the department worked professors I.F.Kryvoruchko, S.M.Vinnychuk, associate professors L.A.Areshnykova, Z.M.Drachova, O.M.Tyazhkorob, V.I.Bobrova, M.G.Kyryyenko, assistants V.G.Barabanchyk, T.I.Illyash, B.V.Zapadnyuk, Y.G.Zahorovsky, V.M.Mezhybors’ka, M.M.Prokopiv, L.I.Sokolova, M.P.Tytarenko, L.A.Shurynok, P.P.Unich. In 1985, under the editorship of professor O.A.Yarosh there were published a textbook “The nervous diseases.”

In May 1992, the department was headed by Honored Worker of Science and Technology of Ukraine professor S.M. Vinychuk. He graduated from the Kiev Medical Institute, and became the follower of the traditions of Kyiv neurological school of an academician B.M. Mankivs’ky. The impact of professional activities of professor S.M. Vinychuk on the development of modern neurology is remarkable. This is indicated by the mainstreams of scientific researches: peripheral vascular diseases of a nervous system and demyelinating diseases He is the author of a new direction in angioneurology – a systematic approach to the study of cerebrovascular diseases. He was the first one who described the main types of systematic and cerebral haemodynamic disorders in acute ischemic stroke, improved the system of delivery of health care to such patients; the first one in Ukraine described the types of hemorrhagic conversion of cerebrovascular accident. An important direction of scientific activity of Professor S.M.Vinychuk is to determine the criteria of early diagnosis of multiple sclerosis and the development of treatment strategies depending on the type of the disease. 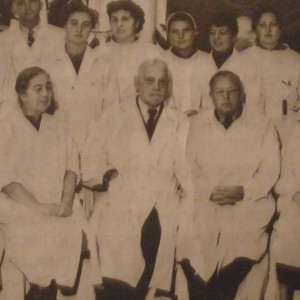 The traditions initiated on the department by the foregoers of M.M.Lapinsky and B.M.Mankivsky is successfully continued by their students and followers. One of them is the teaching staff training. Under the guidance of professor S.M.Vinychuk the department has prepared three doctors of medical science (B.V.Zapadnyuk, L.I.Sokolova, O.A.Myalovyts’ka) and eight candidates of medical science. In 2001 under his editorship there was published a book “The nervous disease.” At the current state it is red the lectures about nervous diseases for the 4 th year of studying students. Much attention is paid to training of internship doctors on neurology (professors O.Myalovyts’ka, T. Dovbonos, associate professor T.Illyash).

There is another good tradition of the neurology department – a collaboration of a lecturer and a student within the computerization of education. Professor S.Vinychuk together with the department staff (associate professor T.Illyash ) were the first at the medical university to implement in the learning process a computerized check academic performance knowledge rating for students and its software. At the department there is a computer classroom coordinated by T.Illyash and by a senior engineer V.Dzyuba and a methodics classroom led by an associate professor M.Prokopiv. At the department it is held the postgraduate courses for the teachers of Ukrainian higher and secondary medical institutions.

Within the formation of medical thinking skills, science and practice of future doctors the great importance is given to the work of students in the science circle (the head is professor L.Sokolova). The student’s scientific circle at the department was created by B.M. Mankivs’ky in 1922. Among former members of the circle are more than 30 doctors and candidates of medical sciences. The members of student’s circle were professor I.F. Kryvoruchko, doctors of medical science Z.M. Drachova, B.B. Zapadnuyk, L.I. Sokolova who worked or still working at the department. Every year at the circle meeting participate about 25-30 students of different years of studying. Only for the last 3 years at the annual scientific student conferences and conferences of young scientists of NMU, Dnipro, Kharkiv, Ternopil, Chernivtsi, Moscow and St. Petersburg were presented about 60 reports, many reporters took prizes.

At the moment the department has four clinical bases: the clinic of nervous diseases of the Aleksandrovskaya Clinical Hospital in Kiev, three neurological departments of the Kyiv City Clinical Hospital № 4, designed for 120 beds, two neurological departments of the Kyiv City Clinical Hospital № 3, a polyclinic of the Ministry of Internal Affairs where they receive study students of the I-IV courses of medical, medical psychology, dental faculties and the faculty for the preparation of doctors for the armed forces of Ukraine. On the basis of the department and clinics function the Center of cerebrovascular pathology, Kiev city center of multiple sclerosis. Teaching staff of department performs much treatment and consultative work, implements new methods of treatment and diagnostics developed at the department to the health care practice. Teaching staff of the department consult the patients from different regions of Ukraine and perform consultative assistance for the patients over the air ambulance.

At the department has always been valued the human dignity, goodwill, respect for students, medical staff and patients. The traditions initiated by our predecessors M.M.Lapinsky, B.M.Mankivsky are successfully progressing today by their followers and students.

The department of neurology retains the principles that guided physicians for centuries and to which all the previous generations lived: saving the patient’s life, alleviation of his suffering. These traditions are the connection of times and generations over the 100-year period of the neurology department existance.