Scientific supervisor of the club:

Were present at the event: Head of Department, PhD in Medicine, Professor Zaichenko Hanna, and 35 students of different faculties of the university. Even several students of others medical educational establishments of Kyiv were present.

On the agenda, the topic of sports pharmacology was considered. In the introductory speech PhD in Medicine, Professor Zaichenko H. actualized part of pharmacology in sports industry. She noticed growth of popularity of sports supplements among young people and gave a brief description from a medical point of view.

The second was 3-rd year student of medical faculty №1, Tereshchuk Oleksandr; he continued the topic of sports nutrition. In addition, he narrated about non-hormonal drugs for improvement of sports performances. His report contained not only main types of non-hormonal drugs with mechanisms of their action, but also stories from personal experience of using some of them.

The next speaker, 3-rd year student of medical faculty №1, Berezinets Ivan continued the topic of drugs in sport. He made a thorough report on the topic of usage of hormonal drugs in sport. He discoursed about growth hormone and its derivatives. Special emphasis was made on a mechanism of action and side effects of usage of hormone-containing drugs.

Klimuk Nazar-Prokhor, 3-rd year student of medical faculty №1, told about steroids, their features and administration in women’s sport. Exactly in this report the most significant side effects of usage steroid drugs among sportsmen were announced. The last one was the Head of the Pharmacology club, 4-th year student of medical faculty №1, Muzychko Dmytro. He summed up and made laconic conclusion, relying on reports of his colleagues. 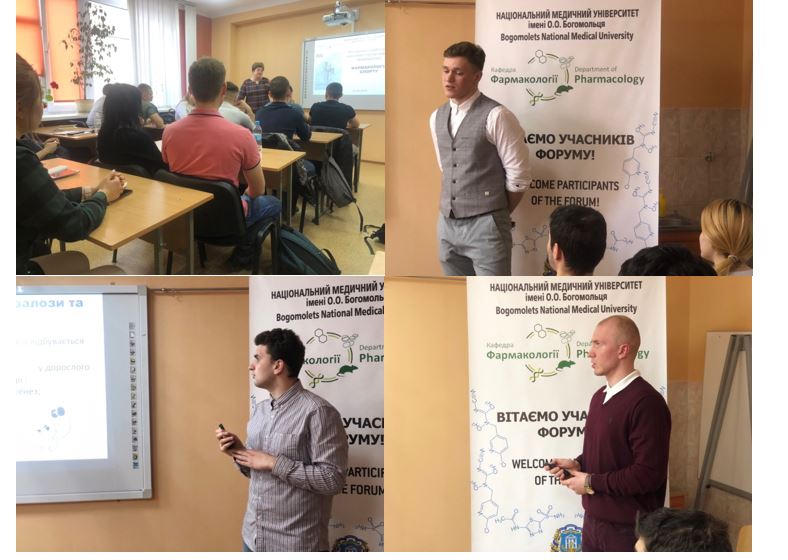 On 4-th of October 2019 the first in this academic year session of Student’s Science Club of Pharmacology Department occurred.

Were present at the event: Head of Department, PhD in Medicine, Professor Zaichenko Hanna, teachers, graduate students of the department, and more than 20 students of different faculties of the university.

In focus was topic «Modern decongestants: problems of safety and rational usage in clinical practice».

In the introductory speech PhD in Medicine, Professor Zaichenko H. congratulated the audience with the start of the club, noticed that among those present there are five members of the club of previous years, who actively worked and continue scientific work nowadays. Professor actualized problematic issues of usage of decongestants in current medical practice, particularly in pediatrics. She emphasized the value of knowledge and competencies on this topic for doctors and pharmacists.

The Head of the Pharmacology club, 5-th year student, Muzychko Dmytro told about the purpose and main tasks of Class and presented a work plan for the 2019-2020 academic year.

The next speaker was 3-rd year student, Martyniv Marta. The topic of her report was “Pharmacological qualities of modern decongestants”. After logical plot and definition of «decongestants», their dosage forms and active substances were described in details. Special emphasis was made on their pharmacodynamics and pharmacokinetics, and most important – the consequences of the irrational administration on the example of clinical situations. The conclusion summarized all the pros and cons of application of decongestants.

The next was Zaichenko Hanna; she represented real statistic usage data of decongestants in world practice and in Ukraine. Common properties, purpose goals and expectations from their action were shown. The issues were considered in terms of evidence-based medicine. Summarizing the data covered during the event, Zaichenko Hanna indicated on the need of personification in administration of decongestants, references to modern clinical protocols adopted in Ukraine for the treatment of rhinosinusitis, EPOS consensus, etc.

The meeting ended up with a productive discussion, a visit to the departmental laboratory “Innovative Pharmacological Research”, acquaintance with the scientific areas of drug development at the Department of Pharmacology.

On 21 February at the Pharmacology Department of Bogomolets NMU a regular meeting of the student scientific group was held together with the SSC of Pathological Physiology Department. The topic of the meeting was “Pathophysiology of development and pharmacological correction of type 1 and 2 diabetes mellitus.” The head of the Pharmacology Department, DMSc, Prof., Zaichenko H. V., DMSc, Prof., Zyablitsev S.V. and more than 50 students of different faculties of the university were glad to attend this event.

In introductory speech, Professor Hanna Volodymyrivna emphasized the relevance of studying diabetes mellitus as well as the search for new ways to manage the glycemic status of the patient. The professor highlighted some problematic issues that should be brought into focus.

The first report was made by Maslova Emilia, the student of the 3rd course, 2 medical faculty. The topic of her report was: “Pathophysiological mechanisms of type 1 and 2 diabetes mellitus”. After the logical description of this pathology, Emilia showed the molecular mechanisms of development of type 1 and 2 diabetes mellitus and  told in detail about it.

The next reporter was Marta Martyniv, the 3rd year student of the 4th medical faculty. She spoke about “Pharmacological correction of type 1 diabetes mellitus and its effects.” Martha paid special attention to complications in organs and systems, as well as showed ways to overcome them at the present stage of development ofpharmacology.

The third speaker was a 6th year student of the Medical Faculty №1, Andriy Grishov. He told us about the possible ways of developing leptin resistance in the case of type 2 diabetes mellitus. Students had the opportunity to understand how leptin affects a patient’s hunger and to be acquainted with recent research of this concept.

The final speaker was Dmytro Muzychko, a 5th year student of the Medical Faculty №1, head of the student science club of Pharmacology. The topic of his report was “Pharmacological correction of type 2 diabetes mellitus.” Dmytro demonstrated to those who were present at the science club the latest guidelines for the treatment of diabetes mellitus. In addition, he told us about the mechanisms of action of the drugs listed in the guidelines.

Professor Hanna Volodymyrivna Zaichenko was the next and she showed the students the most modern drugs for the control of type II diabetes mellitus. One of the interesting new drugs was empagliflozin, which received the Galen Award for its ability to prevent cardiovascular complications in patients with diabetes mellitus. The professor talked about another innovative oral insulin formulations, which are about to hit the pharmaceutical market, too. Hanna Volodymyrivna succinctly summarized all that has been said about the pharmacological correction of diabetes mellitus and focused on the success factors that should be considered in the future study of antidiabetic drugs.

Professor Sergiy Volodymyrovychch Zyablitsev made an interesting report, where he presented the results of his own researches and defined the concept of insulin resistance in diabetes mellitus. He emphasized the pathophysiological factors that should be considered firstly with the development of diabetes mellitus.

The meeting ended with a productive discussion, in which anyone could ask a question and get an answer.