Presently the collective of the department of microbiology, virology and immunology carries out the studies of students on 8 faculties.

At the department every student has an individual workplace, equipped with a microscope, lamplight, gas burner, equipment for painting of preparations of microorganisms with a serve on every table of tap water. During the lectures, along with the tables, are widely used the slide projectors and codoskopes, and lately – the multimedia system. The closed television system functions at the department, every educational laboratory is equipped the monitor and the students have a possibility to study by films and TV programs. The teachers of the department made films with duration of 10-15 minutes, such as: “Selection of clean cultures of bacteria”, “Cellular cultures in virology”, “Laboratory diagnostics of flu”, “Governed works in a microbiological laboratory” and others.

From the moment of foundation the department of microbiology a student scientific group works at it. According to the materials of experimental researches the students-group published the row of works in magazines, collections of scientific works. From such publications began the creative way in science of N.S. Dyachenko, V.P. Shirobokov, V.G. Maydannik, S.V. Gavrile, I.A. Frolov, E.E. Zagoruyko, O.L. Rozenfel’d and others In 2001 according to the order of President of NAN of Ukraine E.G. Paton and rector of the National medical university of the name of O.O. Bogomol’cya academician of NAN Ukraine E.G. Goncharuk, a common genetic laboratory was created. Co-heads of the laboratory were appointed academician V.V. Smirnov and head of department of microbiology, virology and immunology prof. V.P. Shirobokov.

The department of microbiology, virology and immunology of NMU of the name of O.O.Bogomol’cya is a main department among medical Institutes of Ukraine. It a leader of methodical and educational-educate work, provides general methodical guidance of the type departments of medical establishments of Ukraine.

The typical programs of teaching of microbiology, virology and immunology are developed and distributed at the department for all the faculties and specialties which are used during the development of educational-educate plans in all Institutes of Ukraine.

In the period of transition of the educational system of Higher Institutions of Ukraine to Bologna system, the department made enormous work on processing and adaptation of existent curricula to Bologna system, the typical program of teaching after the module system was obligatory to introduction on all territory of Ukraine. New on-line tutorials are now used for the students of specializations “Medical business”, “Pediatric, “Stomatology”, “Pharmacy”, and Medicopsychology”. These profiled programs were developed by a commission under guidance of V.P.Shirobokov and ratified by MOZ of Ukraine.

In 2011 a national textbook «Medical microbiology, virology and immunology» was published and edited by the academician of NAN of Ukraine V.P.Shirobokov and with participation of leading research workers of Ukraine. Presently a work on publishing the second edition of textbook and its translation to other languages goes on. 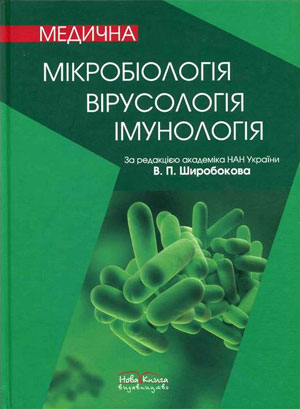 The multimedia educational-demonstration computer programs are developed for all the lectures on course of microbiology, virology and immunology” edited by the academician of NAN of Ukraine V.P.Shirobokov.

Recently the textbooks also were issued devoted to the practical aspects of modern medical and sanitary microbiology and microbial ecology of man.

Within the framework of providing of students with necessary for studies according to the credit-module system materials, at the department the methodical aids are published for independent work of the students.