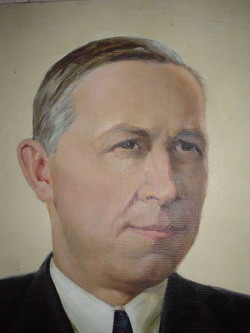 Department of Surgery №3 of the Bogomolets National Medical University has undergone a number of transformations to its present status. It was first created in conjunction with the organization at the Kiev Medical Institute (now – the University) of the Dental Faculty with the name of the Department of Surgery of the Dental Faculty in 1955. The department taught general, faculty, and hospital surgery sections focused on future dentists according to the curriculum. Professor Alexander Kyrylovych Gorchakov headed the department.

After the untimely death of Professor Gorchakov from 1960 to 1963, the Department of Surgery of the Dental Faculty was headed by Professor Dmitro Fedorovych Skrypnychenko, who, being a thoracic surgeon, retained the existing direction – thyroid surgery and expanded the volume of the operations in thoracic surgery, in particular on the breastbone for myasthenia gravis. Accordingly, the topic of scientific developments has expanded.

In 1963 the department was headed by Professor Vasil Dmytrovych Bratus, generalist surgeon with the main direction of surgery of the digestive organs retained the traditional direction of activity of the clinic – thyroid surgery – widely introduced the surgical treatment of peptic ulcer and expanded the treatment of diseases of other digestive organs as well as expanded the volume of thoracic interventions by performing lung resections and surgeries regarding tumor formation of the mediastinum. From 1969 to 1975, again for pedagogical reasons, the clinic performed heart surgeries by closed methods. Thus, under the guidance of Professor Bratus, the Clinic of the Department of Dental Medicine became a wide-ranging institution – the only one in which cardiac surgery existed at Kiev Medical Institute.

According to the spread of practical activity the volume of scientific developments of the department has expanded. While still working at the Kiev Regional Hospital and the Institute for the Improvement of Doctors at the same time, Vasyl Dmytrovych Bratus paid great scientific attention to the problem of gastrointestinal bleeding and introduced a number of scientific researches in this direction. Thus the idea of ​​creating a specialized institution – a center for assisting with gastrointestinal bleeding, to which the department devoted its activity, arose. 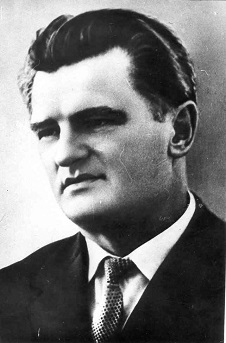 In 1982 the department was transferred to the pediatric faculty and renamed the surgery department of the pediatric faculty. The plans for teaching the sections of general, faculty and hospital surgery have focused on future pediatricians. Practical surgical activity and scientific directions have been preserved and extended in connection with the organization of specialized department for rendering assistance in gastrointestinal bleeding on the basis of surgical department № 1 of Kyiv City Clinical Hospital № 12. For many years of scientific and pedagogical activity V.D. Bratus created and united a teaching staff. By the way, it should be said that changing the name of the department and, accordingly, the peculiarities of the pedagogical process did not lead to changes in the composition of the faculty of the department and clinical base. They remained constant and this provided for the introduction of uniform facilities in medical and diagnostic, and especially – in pedagogical processes. During these years, with his involvement, significantly expanded the range of operations, in particular in abdominal surgery, burn surgery, plastic surgery.

At the same time the head of the department prepared 3 doctors and 25 candidates of medical sciences, published monographs: “Surgical treatment of thermal burns” (1963), “Acute gastrointestinal bleeding” (1971), “Intensive care in emergency surgery” (1980), ” Hemorrhagic shock”(1982). For the improvement of methods of diagnosis and treatment of burns prof. V.D. Bratus in 1981 was awarded the State Prize of Ukraine in the field of science. In 1970 he was elected a corresponding member of the Academy of Sciences of Ukraine, and in 1990p. – Corresponding Member of AMS of Ukraine. In 1984, he published his book on the history of analgesic surgery and antiseptic surgery, which won the first prize at the All-Union competition organized by the All-Union Society “Knowledge”.

On the initiative of prof. V.D. Bratus clinic has expanded to 180 beds due to the addition of another building with an audience for students, laboratories and premises for practical training with students. This created good conditions for the staffing of the clinic with a diverse contingent of patients, which meets the needs of the pedagogical process. The range of surgical activity was greatly expanded, in particular due to abdominal pathology. But it also made it possible to take enough patients from certain narrow nosological forms required for the pedagogical process and the implementation of scientific research.

In 1976, the clinic, earlier than at other departments of the University, began to use organ-saving operations on the stomach on the basis of vagotomy. By 1998, more than 3,000 vagotomy operations had been performed in various modifications in the treatment of complicated pyloroduodenal ulcers.

38 scientific papers devoted to the problems of endocrine pathology came out from the clinic, one doctoral and four PhD theses were defended. Devoted to the acute gastrointestinal bleeding problems – more than 80 publications were made, of which 12 – in foreign journals, 1 doctoral and 11 PhD theses were defended. Prof. V.D. Bratus published a monography on the problem of burns, for which he received a prize of O.O. Bogomolets of the National Academy of Sciences. He played much attention to organizing the pedagogical process, providing it with modern visual aids. The department has created three films, which are shown annually to students. His was the author of more than 400 published scientific works, 14 of which – in foreign sources. It should be noted that he was constantly paying much attention to the history and organization of higher medical education and healthcare. Of these issues, he has published more than 120 works, including two monographys. Since 1993, at the head of the department is Professor Petro Dmytrovych Fomin, and Prof. V.D. Bratus worked as a professor at the department, focusing mainly on pedagogical and scientific activities. 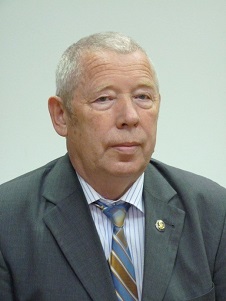 Under the guidance of prof. P.D. Fomin the team of the department continued to work on improving the differential diagnosis and treatment of acute gastrointestinal bleeding and has achieved significant success in this field. The work of the clinic for a long time, before the recognition of new data on the pathogenesis of peptic ulcer, was characterized by high operative activity and the lowest in our country indicators of both general and postoperative mortality in acute ulcerative bleeding. In the clinic, under the guidance of prof. P.D. Fomin new advanced methods of more effective surgical intervention in acute ulcerative bleeding were developed. Four of them are protected by copyright certificates of the invention. Improved immediate treatment of hemorrhagic shock is very important.

In recent years, significant adjustments have been made and applied to the treatment of peptic ulcer disease in the light of new data on its bacterial etiology and pathogenesis. This applies primarily to the further improvement and application of general and local hemostasis methods, which made it possible to dramatically reduce operative activity (from 60% to 17-18%) in the ulcerative nature of acute gastric bleeding, while maintaining low rates of postoperative mortality (at the level of 2-3%) and overall mortality rate (3-4%). On the achievements of the clinic in differential diagnosis and treatment of patients with acute gastrointestinal bleeding prof. P.D. Fomin successfully reported not only at national scientific forums, but also at international surgeons’ congresses in the US, Germany, Israel, Poland, the Netherlands.

During the years of leadership of the department Prof. P.D. Fomin the range of surgical interventions for other surgical pathology, especially for pancreatic diseases, pancreatic and extrahepatic duct strictures significantly expanded. Plastic thoracic surgery for burns and other origin of the esophagus were successfully used in the clinic. Thus an artificial esophagus is formed at the expense of an empty or right half of a colon, depending on features of branching of mesenteric vessels. Great diligence and high surgical skills, care for the patient, a high sense of responsibility for his fate serve because he confidently took the place of a leading surgeon in Ukraine. In 1999, Prof. P.D. Fomin was awarded the honorary title of Honored Worker of Science and Technology, and even earlier he became the winner of the State Prize for successful solution of the problem of treatment of patients with acute gastrointestinal bleeding.

Under the guidance of Prof. P.D. Fomin, during his years in charge of the department, his doctoral thesis (Assoc. Prof. E.M. Shepetko) and eight PhD theses were defended. The staff of the department, under his leadership, fruitfully worked on improving the teaching and methodical work in the lecture process and in the practical preparation of students. Much attention was paid to the creation and implementation of a work program for students of IV, V and VI courses to study all existing sections of special surgery. First of all, it concerns the approval of the end-to-end program with the departments of hospital surgery, which take students from 5 and 6 courses, and teach them to the State Exams. It is envisaged that as a result of this agreement, no new section of surgical diseases should be left that would not be reflected in the work plans of the lecture and practical training for years of study at IV-VI courses.

A new and significant part of the pedagogical process is the training of young surgeons in the internship. Every year, 15-20 young surgeons graduate from the department and receive a certificate. To make their practical training more effective, the department uses another base – the surgical department of the Kyiv City Hospital for Emergency Care for 120 beds.

Significant share in the work of the team belongs to scientific research. Year the staff of the department publishes 25-30 scientific papers, mainly on the problem of diagnosis and treatment of patients with complicated forms of peptic ulcer disease, and above all – with acute gastrointestinal bleeding. The staff of the department is fruitfully working on improving the teaching and methodological work at the department both in the lecture process and in practical classes. Periodically checking the level of preparation of students for practical training using computer equipment, helps to increase the discipline.