Department of Dermatology and Venereology with the course of Cosmetology

As for today the main direction of the scientific research has become pathogenesis and development of new approaches to diagnosis and treatment of chronic dermatoses, urogenitalic infections, fungal infections, immunological studies and antitumor functions of the skin.

Various problems have been developed at the Department. The special patterns of the morphogenesis of the microcirculation of the skin, the states of free-radical processes and lipid fatty acid condition, thyroid function in relation to the immune status of the patient, taking into account the modern concepts, are being explored, the impact of lipid modifying therapy of resort factors, the issue of endogenous intoxication, the rationale of using in some chronic dermatoses microwave resonance and the combined laser, efferent and sorption therapy, efficacy of ultraviolet radiation and polarized light are studied. At the Department the studies started by professors have been extended.

A lot of attention has been paid to studying of ichthyosis. Two dissertations have been devoted to this problem. Thus, L. O. in comparison with the contents of lipids and activity of redox processes in the blood and skin (1984) and Salam A. Ali studied immunological violations depending on the ichthyosis clinical flow (1992).

Further study of the etiology and pathogenesis of acantholytic pemphigus has been left unattended by the clinic. Two Candidate’s dissertations and two Doctoral dissertations have been dedicated to this theme. In the Doctoral thesis defended by Prytulo (2003) the results of results of a study of immunohemolytic, proteolytic imbalance and endotoxicosis syndrome in relation to the pathogenesis of the syndrome course of the acantholytic pemphigus have been presented. Candidate for scientific degree offered highly-informative methods of early differential diagnostics of the acantholytic pemphigus and complex individualized methods of treatment of this disease. Interesting research results have been received by A. Galagovets while studying immunopathogenesis of vesicular dermatitis, which was the topic for his Doctor’s thesis: the author improved methods immunohistochemical diagnostics of the vesicular dermatitis in the zones of basal membrane. Studying clinical features of course of the acantholytic pemphigus in comparison with indicators of immunologic reactivity in the process of complex therapy with usage of the microwave resonance therapy was the theme of the Candidate’s dissertation Zh. V. Koroliova (1990). On the basis of the comparative studies of changes of humorous component of immunologic reactivity whey and blood plasma in the dynamics in patients having acantholytic pemphigus the immunocomplex way to treat pemphigus has been developed and implemented into clinical practice (P.V. Fedorych, 1998).

In the Doctoral thesis defended by S.O. Galnykina (2004) on the basis of the complex clinical and experimental research the current picture of the pathomorphological changes in skin conditions postovarioektomichnoho syndrome has been significantly increased. Candidate for the degree was the first who experimentally proved that the animals with postcastration syndrome of syndrome of dystrophic changes of the epidermis cells experiencing as structural components of dermis, which is the foundation for the emergence of skin diseases. On the basis of comprehensive study of pathogenesis differentiated skin treatment and prevention of disease have been offered in women having postoperative syndrome, among dermatological manifestations of which are androgenetic alopecia, pink acne, menopausal eczema, and xerosis and peculiarities of human papillomavirus infection, chlamydia in the presence of atrophic vaginitis.

Justification of the treatment of whirling hair loss was the topic of the Canidate’s dissertations performed by M. A. Polishchuk and T. O. Yaltynska. Indicators of compounds containing sulfur in the blood serum and the humorous immunity depending on the daily rhythm were studied by M. A. Polishchuk (1989), and T.O. Lytynska researched immune thestatus and condition of the gastrointestinal tract in patients having whirling baldness (2003).

Clinical and immunological features of diagnosis and treatment of demodicosis have been reflected in Candidate’s dissertation performed by B.H. Kohan (1995). Later, B. H. Kohan (2006) studied thoroughly the group of rosacea-likedermatoses. This has enabled him to set a number of factors and mechanisms of development rosacea, демодекозу and peroral usage dermatitis, among which a considerable importance have invasion and pathogenic impact of pincers D. follіculorum and D. brevіs. B. G. Kohan was the first person who has developed a program and algorithms of the primary clinical-laboratory and special examination of patients with inflammatory processes on the skin of the face taking into account polypathogenetic hypotheses of rosacea, demodicosis and peroral dermatitis. It has been established that pincers D. follіculorum and D. brevіs would be tertiary, constant, obligatory, monoxenous, intradermal parasites and these parasites are able to cause pathological changes in the human’s skin, in particular in the areas of their parasitizing, and lead to the disruptions in the immune status of the body owner. The opportunity of the use of topical and seasonal specificity of the pincers D. follіculorum and D. brevіs for developing original therapeutic measures aimed at achieving eradication of these parasites.

The clinic pay its attention to the deep research for the purpose of studying the mycosis fungoides which at one time was launched by the founder of founder of the Kyiv School of Dermatology and Venereology, M.I. Stukovenkov and was continued by I. I. Pototskyi, and then by the disciple of V.G. Koliadenko, O.V. Buyanova, who devoted their research study to the search of micro-circulatory flow of the human skin in connection with the prolonged its structure in the normal state and in the presence of the mycosis fungoides. O.V. Lyudmila Buyanova had studied in details the intercellular interactions in the development process of the epidermis, dermis, microvasculature in the prenatal ontogenesis perod and in adults. The results of the research made it possible to find the clinical-morphological parallels of the development of mycosis fungoides and show the clinical value of morphological changes of microvasculature flow of the skin at the same dermatosis. It had helped to develop the differential-diagnostic criteria for early diagnostics mycosis fungoides.

Together with the Department of Histology, Embryology, and Cytology there were settled researches to clarify the possibilities of regenerative properties of the skin, intercellular interaction of the reparation processesof the main layers of the skin and its nervous apparatus resulted directed impact, and opportunities for using the means aimed to stimulate wound healing (G.I. Slobodianyk).

The clinic has been developing new methods of diagnosing and treatment of sexually transmitted infections. On this subject 14 dissertations have been performed, among them there are four Doctoral dissertations (V.I. Stepanenko, O.I.. Litus, M. M. Lebediuk, O. Ye. Fedorenko) and 11 Candidate’s dissertations.

The interrelation of clinical, pathopsychological, socially-and-epidemiologic characteristics in the presenc of venereal urethroprostatitis in men was highlighted in the Doctoral dissertations of the Associate Professor of the Department, O. Ye. Fedorenko (2003). He has built the model of sexual life of the men residing in big cities taking into account the time of its beginning and dependence on their age and education. According to the results of the research studies it has been established the availability of poly-syndromic violations in the copulative cycle mostly of functional nature in the form of temporary dysrhythmia of sexual relations.

It has been paid a special attention of the Clinic to the issues of scientific substantiation of more effective methods of diagnosis and treatment of syphilis. This problem was devoted to the Dissertation Research performed by V.B. Terletskyi and G. F. Lobanov. Thus, in 1980, the Assistant of the Department V.B. Terletskyi successfully defended his Dissertation thesis on the topic: “The Shortened Method for Treatment of Patients with Syphilis by way of Bitsillina-3, Bismuth and Dimeksid Medications and the Additional Method of Diagnostics of Syphilis of the Early Forms (Determination of Ceruloplasmin) “. This scientist was the first who have studied in clinical practice the distribution of bismuth in solid patients’ blood, red blood cells and serum during treatment by bismuth drugs and syphilis bitsillina-3 which gave the opportunity to identify the direct dependence of the accumulation of bismuth in the body depending on disease duration. In the work the possibility of the use of activity of ceruloplasmin as an additional test for diagnostics of the contagious forms of syphilis.

Additional complications of the diagnostic treatment and organizational-rehabilitation nature in the organization of the systematic actions against venereal diseases appeared in the period after occurrence of the anthropogenic accident at the Chernobyl Nuclear Power Station. This problem was highlighted in the Dissertation work performed by the Chief Doctor of the Kiev Regional Dermatovenerologic Dispensary. F. Lobanov on the topic: “Diagnostics, Treatment and Rehabilitation of Patients having Syphilis among the Population living on the territories polluted by the Radiation” (2003). Dissertator has showed the options of atypical course of syphilis in the territories of background pollution depending on the general state of health, presence of organ and inter-organ diseases, immunological disorders and phenomena of internal radiation exposure. Functional and structural model of organization diagnostics process of the patients with syphilis has been developed and its effectiveness has been shown.

The problem of fungal infections of the skin in the presence of diabetes and patients with cancer has been focused in the Dissertation of the post-graduate students Solomiya Turkevich and Andriy Kravchenko.

Post-graduate student, Svetlana Dmitrenko has initiated a new direction of scientific in the process of her sudies of the possibilities of the dermatoglyphics to forecast the propensity of the human organism to the incidence of psoriasis. It allowed to make categorization of the population of Podil region of Ukraine and to offer conducting targeted clinical examination of the persons predisposed to psoriasis.

Effective scientific work of the Department has been performed with the assistance provided by the other Departments of the University (on the issues of Endocrinology, General and Medical Psychology, Pedagogy, Anatomy, etc. ), NAS and AMS of Ukraine. 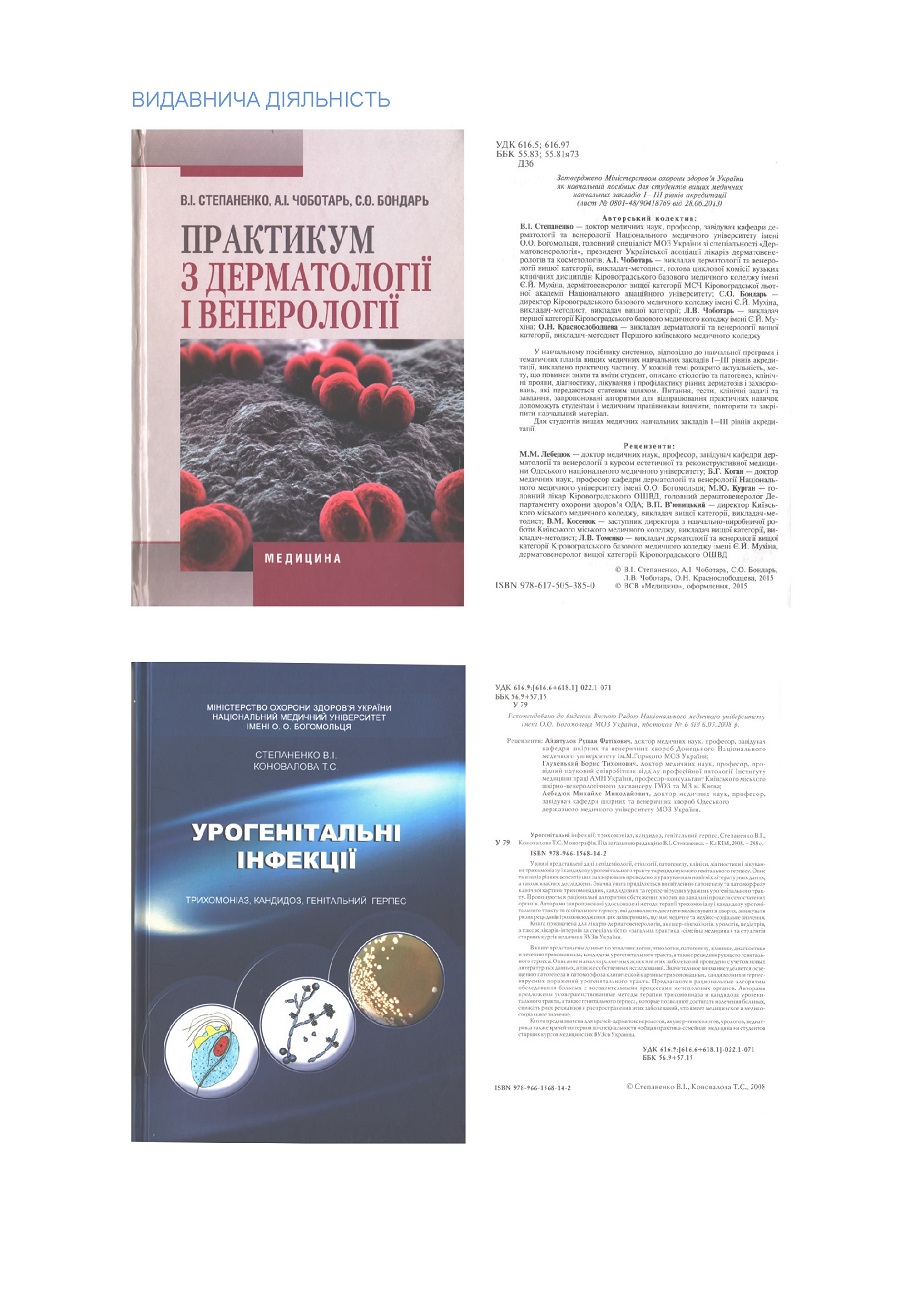 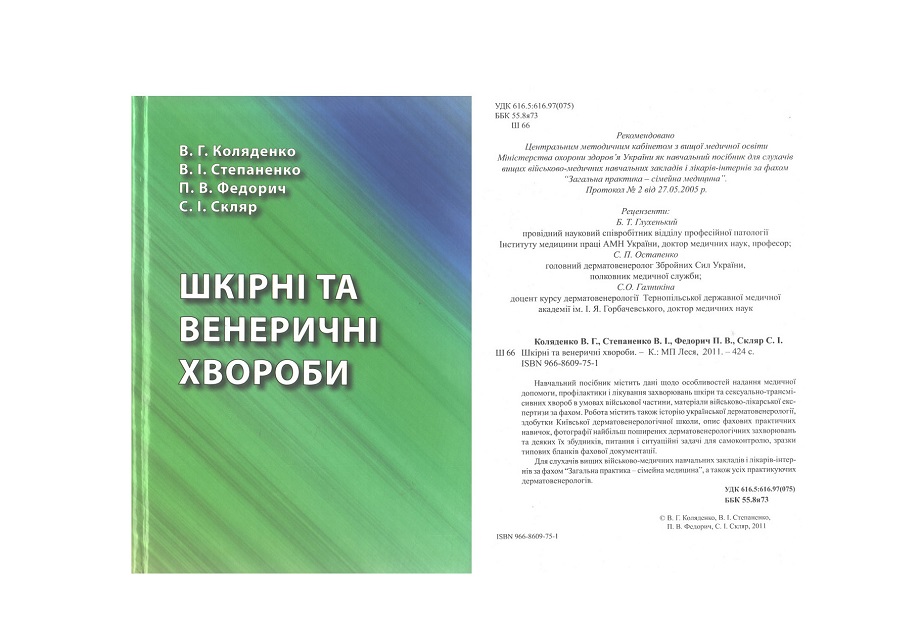 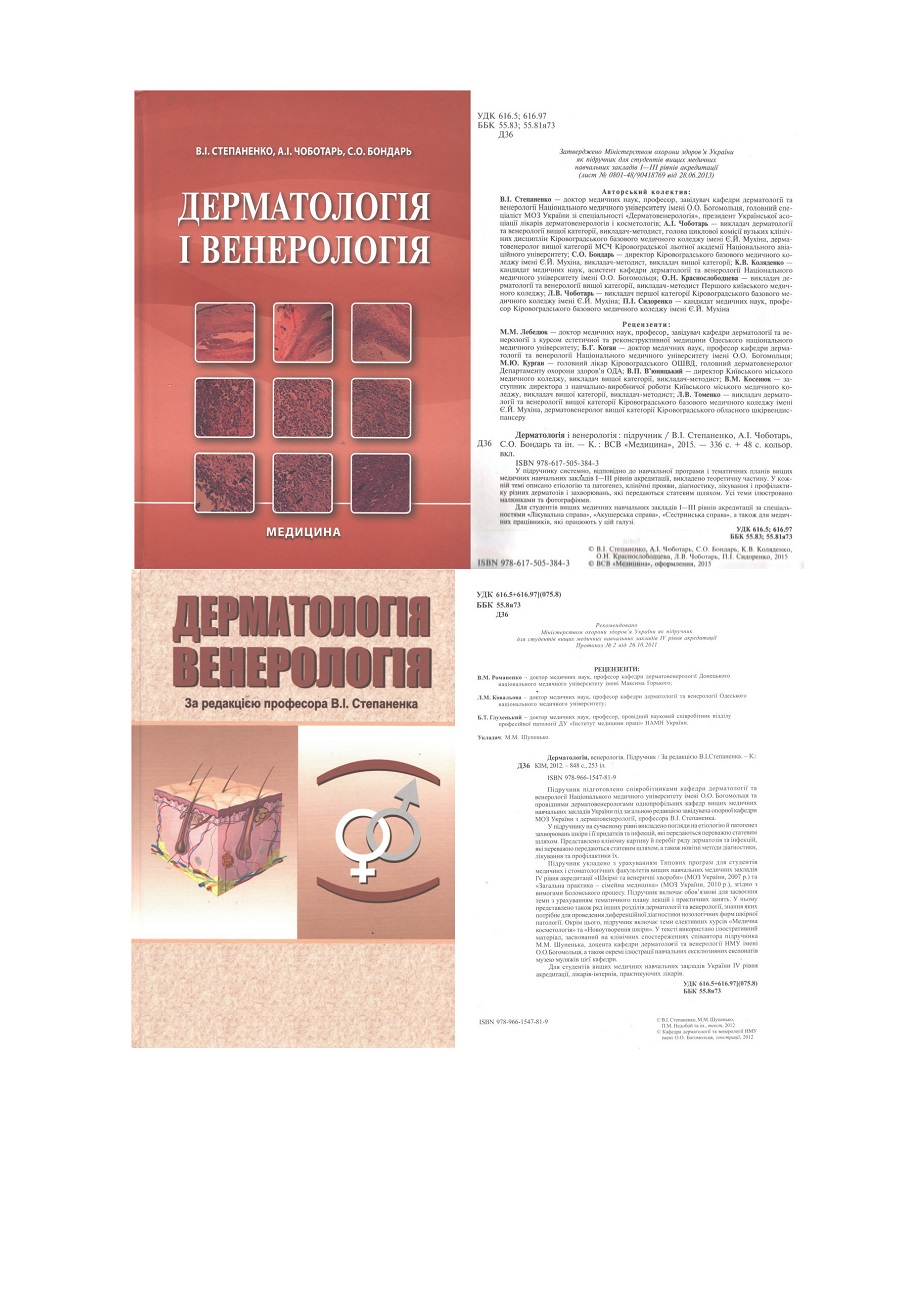 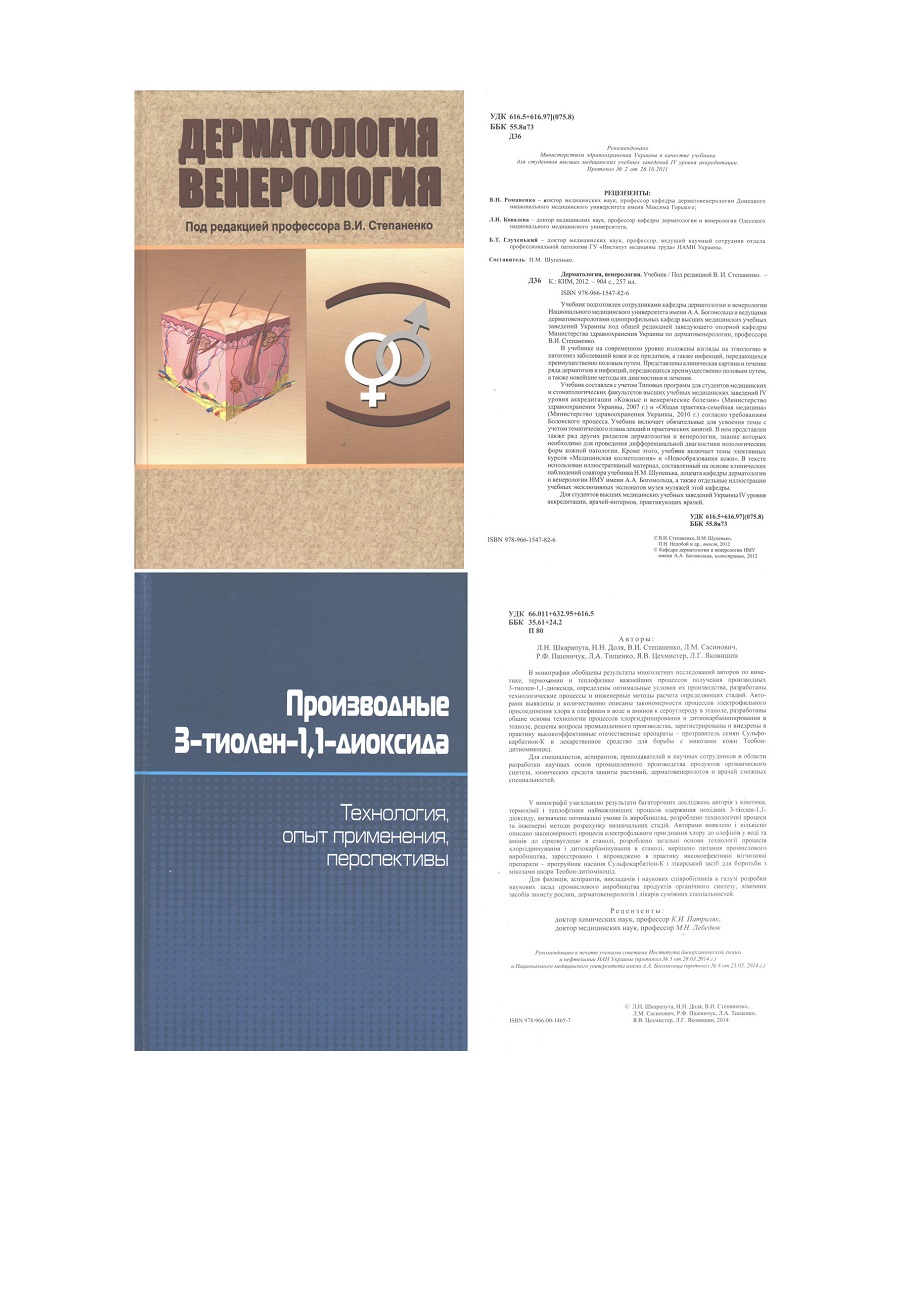 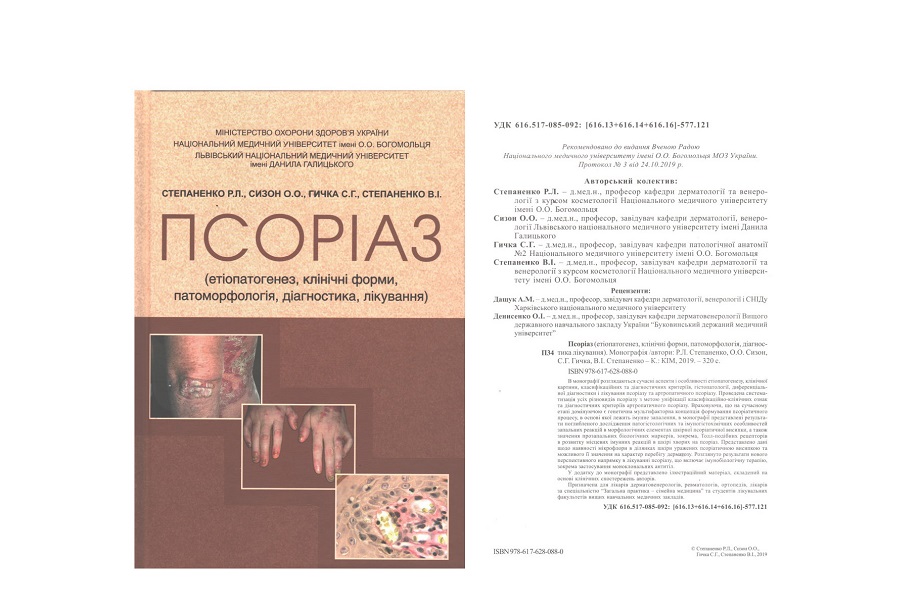