The development of oncology as a science began in ancient times. Descriptions of malignant tumors can be found in the papyri of ancient Egypt and in the Indian manuscripts 2000 years before our chronicle. Most fully in those early times, tumors were described by Hippocrates (460-377 BC), who had the first attempt to classify neoplasms – he distinguished between hidden cancer and cancer with decay.

The invention of the microscope in the nineteenth century gave a new impetus to the study of tumors. So, in particular, in 1801 M. Bish, and then I. Müller (1838) discovered the cellular structure of the tumor and isolated the stroma and parenchyma. They believed that tumor cells accidentally appear in the body among healthy cells. Soon J. Crivellier (1791-1874) expressed the view that the development of tumors requires a certain period during which normal cells must undergo a stage of “cancerous degeneration”. Thus, it was first suggested that tumors develop gradually. Subsequently, as the development of medicine and the accumulation of new knowledge, various theories of the emergence of tumors were created: the theory of irritation of R. Virchov (1853), embryonic theory of Congheim, viral theory of Kubasov (1889), DI Ivanovsky (1892), V.V. Podvisotsky (1908), II Mechnikov (1910), viral-genetic theory of cancer development of L. Zilber and others.

It should be noted the significant contribution of domestic surgeons in the development of world oncology. Many of them have pioneered the development of intervention methods, organ access and operations volume. Y.K. Shimanovsky (1865) recommended that at the same time as the removal of the mammary gland, lymph node extirpation should be performed. In 1878. MI Studinsky, much earlier than Halstead, developed a method of radical breast removal and suggested surgery at stages where the tumor is still small and the lymph nodes are not involved. He recommended that the surgery remove most of the fatty base and skin, with the removal of fascia and muscle, as well as all lymph nodes, including the supraclavicular, and if necessary, resection of the subclavian vein. With regard to esophageal cancer, a great deal has been done by VD Dobromyslov, who experimentally developed a new transpleural method of resection of the esophagus on dogs, which since 1910 is the basis of esophageal surgery. Using the method of VD Dobromyslova, in 1913 F.Torek for the first time successfully performed resection of the esophagus, but in the description of the operation Dobromyslova does not refer. As A.Polyantsev emphasized, this operation is rightly called Operation Dobromyslova-Torek.

The Institute of Experimental Biology and Pathology (organized in Kiev in 1930), under the leadership of OO Bohomolets, played an important role in the development of oncology science, which launched fruitful research on experimental and clinical oncology. OO Bogomolets introduced the theory of the role of connective tissue in the process of development, prevention and treatment of cancer. He created a school of experimenters who successfully studied the issues of carcinogenesis (RE Kavetsky, EO Tatarinov and others). Academician RE Kavetsky, as a consistent student, organized in 1966 the Kiev Institute of Experimental and Clinical Oncology, which became a leading Ukrainian in the field of theoretical oncology. Today the institute is named – Institute of Experimental Pathology, Oncology and Radiobiology of NAS of Ukraine, named after. RE Kavetsky, and is headed by Doctor of Philology, Professor Corresponding Member of the AMS of Ukraine VF Chekhun.

In 1923, the first oncology clinic was organized at the Kharkiv X-ray Radiology and Oncology Institute, headed by Professor OV Melnikov. From the experience of the clinic OV Melnikov and MI Lifshits the first in Ukraine manual for doctors “Clinic of malignant tumors” was published.

In 1934, a clinic for 50 beds for cancer patients was opened at the Kiev X-ray Radiology and Oncology Institute. In this clinic already in the postwar years there were 150 beds, and their scientific and practical activity was carried out by doctor of sciences, professors IT Shevchenko, I.Ya. Slonim, IPDedkov, SM Slinchak – bright representatives of the Kiev School of Oncologists.

In the 1940s the departments of oncology were organized at the Kiev, Kharkiv, Lviv and Odessa institutes for the improvement of doctors. 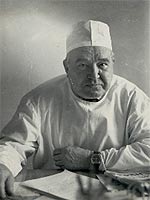 The first head of the Department of Oncology was Dr.Sc., Professor Sergiy Slinchak. In 1937, SM Slinchak entered the Kiev Medical Institute. In 1941, after completing 4 courses, he was mobilized to the Red Army to the front. In the rank of guard of the lieutenant colonel of the medical service, at the end of the war, in 1946 he resumed his studies at the medical institute. From 1949 to 1953 he was a researcher at the Kiev X-ray Radiological Oncology Institute; After defending his PhD thesis, he works as a senior researcher. Since 1955 – Associate Professor of the Department of Oncology of the Kiev Institute for the Advancement of Doctors. In 1966 he defended his doctoral dissertation on the topic “Development of multiple malignant tumors (clinical experimental study)”, and in 1968 he was awarded the title of professor. Since 1971, he has been appointed Head of the Head and Neck Tumor Division of the DPRKI. Since July 1974 he has been invited to head the Oncology Department of the Kiev Medical Institute. Acad. OO Bogomolets. During his years in charge of the department he created a team of specialists: Ph.D. Assistant Professor Ivan Loboda, Candidate of Medical Sciences Assistants Vladimir Bezverhij, Mykola Ivanovich Prikhodko, Sergey Ivanovich Mironyuk. Since 1979 she started working at the department of Candidate of Medical Sciences. assistant Galina Vakulenko, who further defended her doctoral dissertation. Two doctors and 8 candidates of medical sciences were trained under the guidance of SM Slinchak. He is the author of 153 scientific works, including 5 monographs and a textbook Oncology, which has endured several editions. During the years of SM Slinchak’s management, the Department of Oncology became the center of scientific thought and improvement of specialists in the field of oncology. He was able to convey to students the high moral values ​​of medicine, deep knowledge, dedication to their work, the best ideas of the soul. For many years SM Slinchak was the chairman of the Kiev Society of Oncologists. 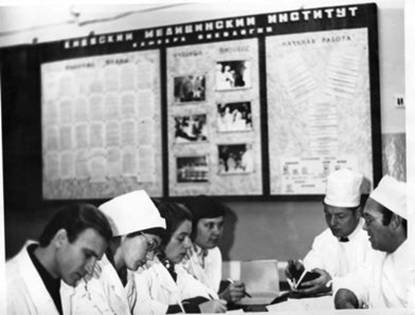 Since 1988, the clinical base of the Department of Oncology has been the Kyiv City Oncology Dispensary, located in Streletsky Lane. Subsequently, after the opening of the Kyiv City Clinical Oncology Center in 1990, the department moved to its base.

Since 1989, the duties of the Head of the Department have been performed by an experienced clinician and teacher, Professor Alexander Milanovsky. OJ Milyanovsky is the author of 196 scientific works, of which 7 monographs, 9 copyright certificates and 3 medals of the VDNG of the USSR and the USSR. Has prepared 7 Candidates of Medical Sciences. He substantiated the technique of endolymphatic chemotherapy and hormone therapy, laser and cryotherapy of precancerous diseases and cervical cancer. 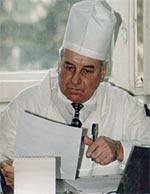 In 1991, the Department of Oncology was headed by MD, Professor, Full Member of the New York Academy of Sciences, Professor Alexander Yaremchuk. Alexander Yaremchuk graduated from the Medical Faculty of Chernivtsi State Medical Institute in 1961. After that he worked as a surgeon in Yenakiyevo district of Donbass for 6 years. In September 1967 he entered the clinical residency of the Department of General Surgery # 1 of Donetsk Medical Institute (Head of the Department – MD, Prof. I. Matyushin). After graduating in 1969, he was enrolled in a competition for postgraduate study at the Department of Surgery at the Kiev Medical Institute. Since 1970 – Assistant Professor and since 1979 – Assistant Professor of the Department of Faculty Surgery. In January 1991, he was elected to the position of Head of the Oncology Department of the OO Bogomolets National Medical University, and in 1996 he was re-elected to the new Academic Council. In 1972 he defended his PhD thesis on the topic: “Clinical and morphological characteristics of inflammatory” tumors “of the anterior abdominal wall and gastrointestinal tract, which simulate malignant neoplasms”. In 1990 he defended his doctoral dissertation on the topic: “Surgical treatment of chronic colostasis”. Actively conducted research work, author of 250 scientific works, of which 5 monographs, 6 manuals, 26 inventions and 6 patents corresponding to the direction of the research work of the department. He was awarded the medal of the VDNG of the USSR, medals for the memory of the 1500th anniversary of Kiev, the Veteran of Labor, the badge of the Ministry of Higher Education of the USSR for excellence in work, and the “Excellent Health”. prepared three candidates and two doctors of medical sciences. 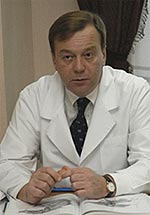 For many years he has been a member of scientific unions, namely: from 1979 – the Ukrainian Union of Surgeons, from 1980 – the Union of Surgeons, from 1981 – the Ukrainian Union of Oncologists, from 1983 – the Union of Oncologists, from 1989 – the European Union for Cancer Research (European Society for Cancer Research, since 1993 – American Association for Cancer Research, since 1995 – American Radiology Union (American Radiation Research Society), since 1996 – North American Society for Hyperthermia (North American Hyperthermia Society), since 1997 – American Union for Surgical Oncology (American So ciety of Surgical Oncology), since 1998 – American Society of Gastrointestinal Surgeons (American Society of Alimentary Tract), since 2000 – European Society for Medical Oncology, since 2001 – International Association for Gastric Cancer (International Gastric Cancer Association). Since 2008 he is a member of the Association of Directors of Centers and Institutes of Oncology, Radiology and Radiology of the CIS countries. Since 2008 he is a member of the Presidium of the Ukrainian Medical Union.

In 1992, he received a grant from the W. Lombardi Foundation for Research at Georgetown University, and in 2000-2001 became the Research Fellow of the United States Foundation for Public Research and Development. Since 2005 he is the head of a scientific project on oncology financed by the budget of Ukraine. In 2004-2006, under his direction, an open, randomized, controlled study of the evaluation of the effectiveness of complex treatment of breast cancer patients was conducted. In 2007-2008 – development of a method of complex reconstructive-restorative treatment of patients with locally advanced breast cancer. He is the editor-in-chief of the Bulletin of the National Cancer Registry and a member of the editorial board of the following journals: Oncology (The Scientific and Practical Journal), The Lancet Oncology, Medical (Scientific and Practical Journal), Ukrainian Radiological Journal (the Scientific and Practical Journal), Consilium Medicum Ukraina.

He is actively involved in international surgical and cancer congresses (91 oral and 115 poster presentations). Author of more than 310 scientific papers, including 4 monographs, 3 textbooks (in Ukrainian, Russian and English) and 6 manuals. About 100 scientific papers have been published in foreign journals. Author of 41 patents. He is a scientific advisor of doctoral and scientific supervisor of PhD theses. From 2005 to 2011 Chief Oncologist of the Ministry of Health of Ukraine, Honored Doctor of Ukraine, Member of the National Council for Health under the President of Ukraine. Following the initiative of Igor Shchepotin, in 2008, the National Cancer Institute, which he headed, was established at the Institute of Radiology and Oncology. In 2008, the National Cancer Institute became an additional base of our department. 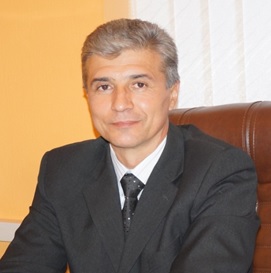 Since 2014 he has been headed by the Department of Oncology Doctor of Medical Sciences Vereshchak Roman Ivanovich. In 1985. He graduated from the Faculty of Medicine of the Kuibyshev Medical Institute. Worked until 1990. in the Starodubsky CRC of the Bryansk region by the general surgeon.

In 1991-92. studied in clinical residency at the department of pulmonology of the KIAPO them. PL Shupik. After completing his residency, he was hired by the Department of Thoracic Surgery for Adult KCML # 17. He took an active part in the work of the clinic, both in practical activity and in scientific. In 1999 he fulfilled his job as a contractor. and successfully defended his PhD thesis on “Reconstructive lung cancer surgery”. Since 1999. has the highest category in the specialty “Thoracic surgery”.

In 2008. defended his doctoral dissertation on “Treatment of cicatricial esophageal stenosis”. Performs surgical operations on the esophagus, trachea, bronchi, genital organs, lungs, chest wall, diaphragm, stomach, thyroid gland. He is a full member of the European Thoracic Surgeons Association. Participates in annual international scientific conferences and is published in international publications. He has 70 printed works, co-author of 1 textbook, has received 9 patents for inventions for organ-preserving operations in lung and esophageal tumors.