O.O. Bogomolets National medical university together with Ministry of health care of Ukraine and Kyiv state administration on 18, April, 1990, for the first time in the territory of former USSR and Ukraine established originally the medical classes, and later in 1991 two state medical lyceums, which became the necessary component in arrangement of continuous medical education system.

On 11, June, 1997, with assistance from Ministry of health care of Ukraine, Ministry of education and science of Ukraine, Kyiv city state administration, the only Ukrainian medical lyceum, which founder was O.O. Bogomolets National medical university, was established.

Ukrainian medical lyceum at O.O. Bogomolets National medical university, according to its Charter, is the secondary comprehensive school that provides with acquisition of knowledge over state educational minimum, carries out the pre-vocational training of talented youth, and trains it to study at higher medical school and to work at health care establishments as junior medical staff. The Pro-rector for Science and Education Work and Pre-University Training at NMU, Doctor of Pedagogy, Professor Ya.V. Tsekhmister is now at the head of the lyceum.

The peculiarity in functioning of the lyceum is that it is the structural division of National medical university and uses the potential of medical gymnasium No 33 in c. Kyiv (director- V.L. Babenko). Seven departments of the University – medical and biological physics, biology, bioorganic, biological and pharmaceutical chemistry, medical and general chemistry, foreign language, Latin language, Propedeutics of internal medicine No 1 – take part in academic process of the lyceum.

In 2011 the lyceum celebrated its 20 th anniversary.

82 teachers, among them 57 teachers of the University (8 professors, 42 assistant professors and senior teachers, the rest teachers have the degree of Candidates of Sciences) and 46 teachers-methodologists work at the educational establishment.

The lyceum was awarded with the Great Silver medal from International Pedagogical Academy ( Russia, c. Moscow) for achievements in the sphere of education, culture and science for the first time among special medical schools in the territory of CIS countries.

The educational establishment was awarded with the Honorary Letter by Verkhovna Rada of Ukraine, Cabinet of Ministers of Ukraine, Honorary Diploma by Ministry of education and science, youth and sport of Ukraine for implementation of innovative pedagogical technologies into academic process.

According to the National rating of Ukraine the lyceum was acknowledged as “Flagman in science and education”. The lyceum was awarded with the Honorary title “Leader in modern education” for innovative pedagogical activity in modernization of education in Ukraine during many years. In 2011 this educational establishment was awarded with the Silver medal in nomination “Application of modern learning aids in comprehensive school, vocational and adult education”, Golden medal in nomination “Implementation of innovative pedagogical technologies into academic process of secondary school”, Golden medal in nomination “International cooperation in the sphere of education and science” at International educational exhibitions.

P. Kulish International Charitable Fund started to award the personal scholarships to the best teachers and pupils of the lyceum since 1997.

The lyceum is the collective member at Small Academy of Sciences of Ukraine. O.P. Romodanov Scientific Lycee Society in 2001 for the first time in Ukraine was awarded with the highest decoration “Golden Owl” by the Presidium of Small Academy of Sciences, which was presented by the Hero of Ukraine, President of NAS of Ukraine, academician B.Ye. Paton at the General Meeting of the Academy.

Since 2000 the lyceum keeps the first place among comprehensive schools in c. Kyiv due to the results from scientific contests-defenses at Small Academy of Sciences of Ukraine.

In 2010 the educational establishment became the absolute winner in all-Ukrainian contest for scientific research works of pupils-members at Small Academy of Sciences among 9-11 classes in c. Kyiv. Ukrainian Medical Lyceum was pronounced as the leader in implementation of the new forms on organization of scientific research work among pupils of 9-11 classes from the high tribune at the Presidium of the Academy of Sciences of Ukraine.

In 2000 the Scientific Council at Neurosurgery Institute of NAMS of Ukraine, named after A.P. Romodanov, took the decision to award the pupils of the lyceum with personal scholarships.

Over 2,030 pupils, who became the students of all faculties at O.O. Bogomolets National medical university, graduated from the lyceum for 20 years. The graduates from the educational establishment successfully work at health care establishments in c. Kyiv, regions of Ukraine, study at clinical residency, graduate school and institution of doctoral candidacy; continue studying in different countries of the world. Many of them are known not only in our country but abroad.

License from Chief administration of education and science in city Kyiv 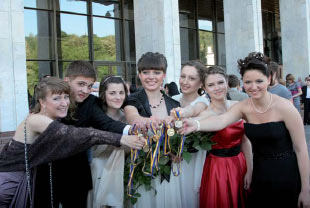