At credit modular system for organization of academic process there are no examination sessions and the following kinds of control are anticipated:

The maximum amount of scores, which student can obtain at study of each module, is 200, including for current academic activity – 120 scores, due to the results from final modular control – 80 scores. The final modular control is considered to be passed if the student obtained not less than 50 scores. 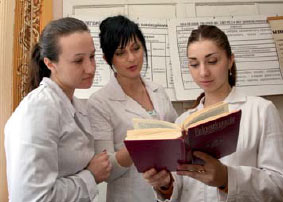 After learning the academic discipline all students in this course, who study due to one specialty – “medical business”, “pediatrics”, “medical preventive care”, are ranked at dean’s offices due to ECTS scale, awarding the marks “A”, “B”, « C » , « D » , « E » . Only the students, who successfully finished studying the discipline, are ranked.

F mark is put to the students, who attended all class hours in the module but failed to obtain minimum amount of scores for current academic activity and were not admitted to final modular control. This category of students is entitled to study the module for the second time.

With the permission from pro-rector on scientific and teaching work, the student may increase the mark on discipline by passing through final modular control for the second time (not more than three times for the whole period of study).

The control measures at traditional system of study include current and final control:

Semester examinations are taken by students during examination period on a schedule that are brought to their attention not later than one month prior to the session.

Semester differentiated credits and credits are passed at the last practice training lesson of the discipline, after finishing of training practice.

The number and description of practically-oriented state graduation exams depends on the area and the specialty for which the student used to study.

For the students, who study due to the traditional system, the results from exams and differentiated credits are assessed pursuant to 4-grade scale (“excellent”, “good”, “satisfactory”, “unsatisfactory”), and credits – due to 2-grade scale (“passed”, “failed”) and are introduced into the examination sheet, student’s book, academic card of student.

The students, who failed to come to the exams without valid reasons, are considered as such ones, who received unsatisfactory mark.