For 84 years of existence of the department its employees in different historical stages made a great contribution in development of microbiological science.

In a period before the Great Patriotic War at the department under the direction of prof. M.P. Neschadimenko, the row of valuable researches was carried out. Thus the dynamics of forming of aglytine in blood after non-permanent and multiple injection of typhoid vaccine (A.M. Mar’yasheva, 1927); divergences were well-proven in forming of B-cell response immunity at a vaccination by warmed and formalinization typhoid vaccines (N.O. Korchak-Chepurkivska, A.M. Mar’yasheva, 1932); the adjuvanticity of tablet dysenteric vaccines at using through a mouth was shown (N.O. Korchak-Chepurkivska, A.M. Mar’yasheva, 1932). Y.O. Kozlov in this period studied the firmness of some representatives of enterobacterium in water.

From 1970th at the department executed research on the problems of general microbiology (growth, development, cultivation, functional activity of microorganisms). Especially intensively it took place during guidance of the department in 1973-1979 by an associate professor V.V. Gashinskiy.

In this period the wide researches of influence on bacterium and viruses of some disinfectants and surface active matters began at the department. With participation of the Space Center of the USSR and other Institutes were studied the normal micro flora of skin and natural excretions of man in the conditions of the protracted stay in the hermetically reserved spaces, methods of deactivation of microorganisms with the help of disinfectants (O.G. Tishko, A.A. Furman, V.Y. Pochinok, N.K. Sidorenko, T.M. Manilo and others). Efficiency of new antimicrobial matters has been grounded. There were offered the washings compositions with bactericidal and virucidal effect – on the basis of natrium salt of dichloride acid, chlorinated trisodium phosphate, catamnesis of AB and others (V.P. Shirobokov, O.I. Evtushenko, N.O. Karavanska, O.O. Teteneva, A.I. Yakimenko and others).

As continuation of this scientific direction were carried out the panoramic sanitary microbiological and sanitary virology researches.

Thus, researches of clinical and sanitary microbiology to a certain extent united bacteriology and virology, presented the world of microbes as one unique unit. At the same time, virology direction has independent and very important role in the advanced study of the department, especially during the last decades.

A former student of professor S.S. Dyachenko, V.P. Shirobokov has risen from rank of a group-student to the head of the department. As early as 1965 in a magazine of AMS of the USSR the results of his researches carried out by him in student years were published, – the main properties of infectious RNK of viruses of Coxsackie in the different living systems.

A candidate’s dissertation of V.P. Shirobokov (1967) was devoted to the Molecular biological study of properties of viruses of Coxsackie. In 1977 while being the associate professor of the department, V.P. Shirobokov defended a doctoral dissertation for the theme of «Comparative study of biological properties of viruses of Coxsackie and their selection variants”. In this work a new position about dissociation of retrovirus was first formulated in reproduction of 2 variants -Abent+ and Abent-, which differ between itself by the complex of principle properties, including virulence and a biogenic activity. The row of effective methods of virology and molecular biological research was developed: cleaning and concentration of retrovirus, receipt of viral hemolytic zones in the culture of cells, cleaning and fraction of cellular and viral RNK on bentonitic columns and others. The phenomenon of dissociation of retrovirus is registered during reproduction, development of methods of selection of separate variants (dissociative) that later deeply studied and continues to be studied by the employees of the department.

An important role for the progress of scientific research is related to organization at the department a hybrid laboratory for the receipt of monoclonal antibodies. The laboratory is equipped with the most modern devices (laminar clean benches, CO2- incubators, automatic liquid chromatograph etc.). In creation of this laboratory took part O.I. Evtushenko, Y.V. Zagorodnyuk, L.V. Gorodova, N.F. Pul’nyashenko, K.P. Lyaschenko, K. Lipatnikova, I.V. Nikolaenko, V.L. Zhovnovata and others. On the bases of the hydrides laboratory, I.V. Nikolaenko created the original panel of monoclonal antibodies, that is able to differentiate virulent and vaccine culture of polynomialities which in quality is not worse than the oversea analogues (1999). A graduate student of the department I.G. Kostenko received the monoclonal antibodies, which are able to differentiate dissociative polynomialities (in 2003).

The laboratory of genetic diagnostics works intensively. It is equipped with modern multichannel squinter, amplifier synthesizer of DNK. In the laboratory researches are carried out on the exposure of nucleus sequence of RNK of disociants of polynomialities, tox-re diphtherial bacteria, gene of 16S-RNK microorganisms with the depositary of ND of microbiology and virology of the name of academician. D.K. Zabolotniy of NAN of Ukraine; primers are being synthesized; diagnostic researches are carried out with the help of: polymerase chain reaction. I.V. Nikolaenko, L.V Kopanicya, O.V. Kostyuk, G.V. Panasenko took part In creation of the laboratory.

Cryo laboratory with the cryo museum of cultures of cells and hybrids, equipped with two generators of liquid nitrogen and modern lyophilic box (O.I. Evtushenko, K.I. Lipatnikova, I.P. Zabula). According to the instructions of MOZ of Ukraine on the bases of the department in 1995-1998 functioned the Ukrainian reference laboratory on poliomyelitis under the direction of V.P. Shirobokov. The employees of the department: d. m. n. doc. B.I. Zadorozhna, doc. K.I. Lipatnikova, assistants I.V. Nikolaenko and L.K. Gordeeva, graduate student L. V. Kopanica took an active part in work of the laboratory. The main task of the reference laboratory was participating in the program of VOOZ in relation to world program of fighting the poliomyelitis. 243 cultures of polio- and other retrovirus were investigated; internal type differentiation was made with 86 cultures of polynomialities, the results of which are confirmed in the Regional reference center of VOOZ (Moscow) by the tests of genetic analysis. The employees of the department took part in development of methodology and organization of the National days of immunization of population of Ukraine by a living poliomyelitis vaccine. Collection of 83 cultures of wild viruses of poliomyelitis of I-iii types is collected, which circulated on territory of Ukraine in 1994-1999, which is given to the depositary of VOOZ. Biological properties are studied and the cluster analysis of polynomialities, isolated from the different regions of Ukraine is made, a new method is offered and patented of inwardly typical differentiation of polynomialities of A-type by bentonite, a candidate’s dissertation is defended by L.V. Kopanicya, in 2003.

In 2001 according to the order of President of NAN of Ukraine E.G. Paton and rector of the National medical university of the name of O.O. Bogomol’cya of academician of NAN of Ukraine E.G. Goncharuk, a general genetic laboratory was created. Due to persistent work of the researchers there were set divergence in the genetic code of variants of Abent+ and Abent- of vaccine cultures of polynomialities (I.G.Kostenko), a nature of genetic changes is studied at the untoxic cultures of diphtheria bacteria, genetic bases of virulence of viruses of ESNO, found out the taxonomical position of row of microorganisms from the National depositary by the way of sequence of 16S RNK.

In 2004 V.G. Voycekhovskiy defended a doctoral dissertation, devoted to the extraordinarily important stage of development of bacteria – agregacy. It was succeeded to prove that spore genetic is not an elemental process, but regulated in the colony of microorganisms certain chemical matters – inductors of sporelation. Thus aggregate of microorganisms is not simple the sum of separate individuals, but demonstrates the initial stages of formation of the unique system. (Voycekhovskiy Valery Grigorovich. Aggregation of cells in ontogenesis of spore genetic microorganisms: dissertation of doctor of medicine sciences: 03.00.07 / National medical University of O.O.Bogomol’cya. K., 2004.)

Also the modern laboratory of electronic microscopy operates at the department, a considerable contribution to creation of which was brought in by associate professor Bobir V.V. and a senior teacher Oleksienko I.P. Due to the work of this laboratory it was succeeded to set substantial divergences in the structure of capsid of retrovirus, in particular to prove that even simple viruses which do not have a supercapsid are however capable to retain on the surface of lipidic components which can considerably change their biological properties (Bobir Vitaly Vasilievich. Superficial components of viruses of Coxsackie V and their selection variants: Dissertation of candidate of medical sciences: 03.00.06 / National medical university of the name of O.O.Bogomol’cya. K., 2005. – 142 p. – Bibliogr.: papers 116-142.). In 2011 the second electronic microscope of production of the Japanese firm JEOL, appeared in the laboratory that allowed increasing efficiency and productivity of work of the laboratory.

During all historical stages of existence of the department, its inherent close creative connection with the research institutes of microbiological type, especially with NDI of epidemiology and infectious diseases of the name of L.V. Gromashevskiy of MOZ of Ukraine and NDI of microbiology and virology D.K. Zabolotnogo NAN of Ukraine. Collaboration will be realized in execution general scientific projects. From these institutes came to work at the department the teachers experimental research workers: M.M. Fal’, A.A. Furman, V.G. Porokhnickiy, K.I. Lipatnikova, T.I. Kraynyukova, O.M. Kornyushenko, O.M. Chernyavska, V.I. Zadorozhna, O.V. Surmasheva, A.K. Zaval’nyuk and others.

In 2006 the result of fruitful collaboration with the institute of ecology and hygiene of the name of Marzeev resulted in a defense of doctoral dissertation of O.I. Evtushenko, who began the creative way at the department of microbiology, virology and immunology of NMU, and presently is the deputy of director of the Institute of ecology and hygiene. (Enterovirus in pathologies of fetus and newly-born: dissertation of doctor of medicine sciences: 03.00.06 / National medical University of O.O.Bogomol’cya. K., 2007. – 302 p. figures, tables – Bibliogr.: p. 252-297.) Dissertation is devoted to the extraordinarily actual theme of influence of viral infections on motion of pregnancy and subsequent development of child.

In 2011, a national textbook “Medical Microbiology, Virology and Immunology” was published, edited by Academician of NAS of Ukraine V.P.Shyrobokov and with participation of leading scientists of Ukraine. 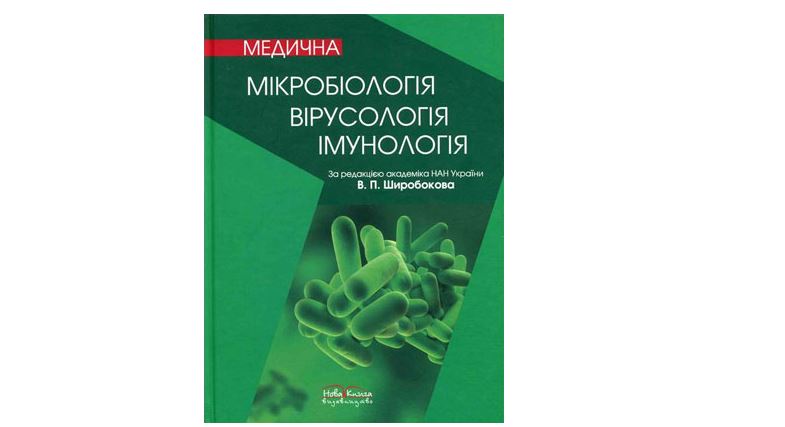 In 2015, in order to meet the needs of foreign students with Russian language studies, this textbook was reissued in Russian. 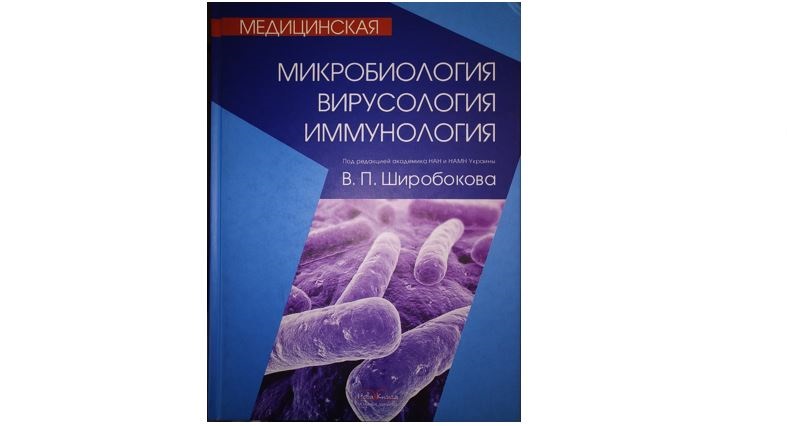 In 2019, due to a significant increase in the number of English speaking students, a textbook was published in English. 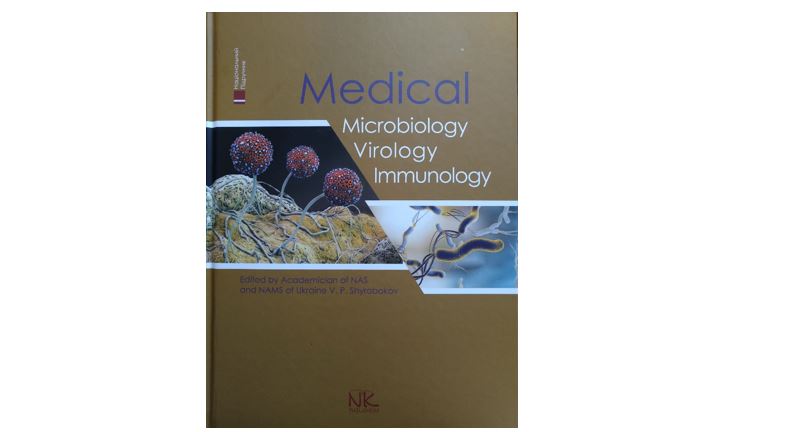 In recent years, textbooks on the practical aspects of modern medical and sanitary microbiology and human microbial ecology have also been published. 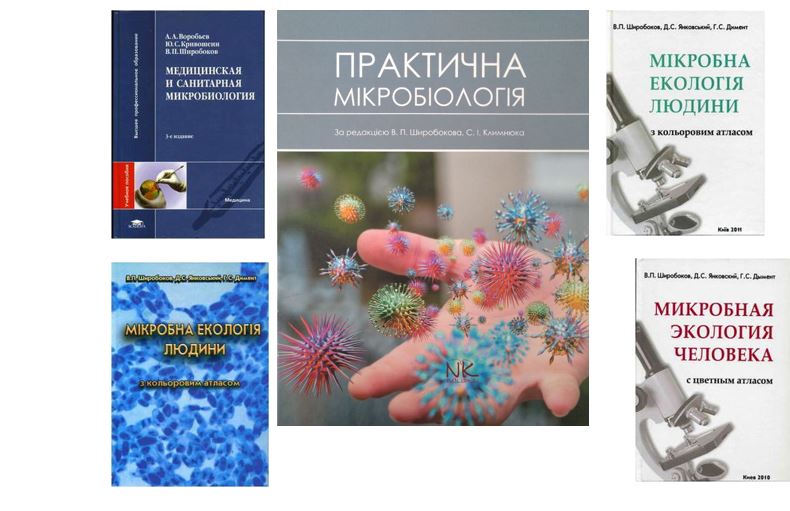 In the framework of providing students with the necessary materials to study the credit-module system, the department issued Ukrainian, Russian and English methodical instructions for self-dependentwork of students.