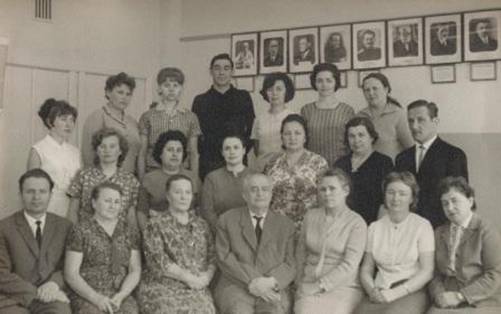 Staff of the Department of Pharmacology and Clinical Pharmacology, 1967
Bogomolets National Medical University

Department of Pharmacology and Clinical Pharmacology was organized in 1841 among top ten departments of St. Volodymyr University under the name “Healing plants and prescription writing”. Until 1884 the department was not independent, it was united with the Department of General Therapy. The first head of this department was student of Kazan University, professor Mykola I. Kozlov (14.11.1814-10.10.1889), who taught anatomy, pathology, history of medicine, and pharmacology and prescription writing. Scientific researches on problems of general pharmacology were conducted at this Department.

From 1849 to 1859 the department was headed by professor Vasyl V. Becker (1811-28.03.1874), a graduate of Dorpat University (now The University of Tartu), who first worked on the position of professor of the Department.

When V. Becker retired on pension (1859) the Department headed renowned anatomist and physiologist Oleksandr P. Walter (28.12.1817-23.09.1889), also a graduate of Dorpat University. He is better known as a physiologist, particularly for his work on circulatory physiology, heat generation and so on.

O.O. Sheffer was elected the Head of Department of Medicinal Chemistry and lessons of pharmacology from 1865 to 1868 were given by Karl-George-Emil H. Heybel (25.9.1839, date of death has not been established), who in 1861 graduated from Dorpat University.

During this period a significant contribution to the development of pharmacology at the Medical Faculty made M.I. Pyrohov, thanks to whom the main directions of this area of medicine were formed.

Significant contribution to the development of pharmacology made Ukrainian scientist, born in Kyiv in a noble family, Volodymyr I. Dybkovsky (1836-1870), who in 1858 graduated with honors from Kyiv University, Medical Department. The name of V.I. Dybkovsky is associated with new stage in pharmacology teaching and conducting researches at the department.

Due to sudden death of V.I. Dybkovsky in 1970, head of the department was elected Professor Petro P. Sushchynsky (1842 – date of death has not been established), who in 1867 graduated from Moscow University. Research works were devoted to pharmacology of new medicines of the time. Professor P.P. Sushchynsky moved to work in Moscow and from 1876 to 1897 the Department of Pharmacology was again in charge of Professor Karl-George-Emil H. Heybel.

After the election in 1898 Yuliy P. Laudenbah the Head of the Department of Pharmacology (10.01.1863-1910), who in 1889 graduated from Kyiv University and in 1894 brilliantly defended his Doctoral dissertation on “Hematopoietic activity of spleen” scientific activity and methodical work became more active.

After changing by Yu.P. Laudenbah his place of work in 1908, Head of the Department of Physiology in 1909 was elected Assistant professor Anton A. Trzhetsesky (dates of birth and death are not established), who headed the department until 1922. In 1899 A.A. Trzhetsesky defended his Doctoral dissertation on “The effect of hydrochloric acid on the processes of putrefaction in the intestines”.

A new creative rise of the Department was recorded in 1925 due to the election of Hryhoriy L. Shkavera the Head of the Department (09.01.1884-3.12.1953). He was a student of the famous Russian pharmacologist, Academician M.P. Kravkov.

Kyiv Medical Institute was evacuated to Ufa during the Great Patriotic War, where in September 1941 were conducted systematic studies of pharmacology. The Department of Pharmacology in Chelyabinsk headed Assistant professor Fedir I. Heylih. He also gave lectures and Teaching assistant Sofia H. Serebryana conducted lab practicals.

World renowned scientist, pharmacologist and toxicologist, Academician of the USSR Academy of Sciences, Honored Scientist of Ukraine, Doctor of Medical Sciences and Professor O.I. Cherkes was Head of the Department of Pharmacology of the Kyiv Medical Institute (now the National Medical University) from 1944 to 1971.

During 1971-1972 the Department of Pharmacology led student of O.I. Cherkes, Professor Neonila M. Dmytrieva (18.11.1910-07.09.1986), who in 1937 graduated from Kharkiv Medical Institute and in 1940 she graduate from the post-graduate studies in O.I. Cherkes. N.M. Dmytrieva is the author of over 100 scientific papers. N.M. Dmitriev adequately developed urgent problems of general pharmacology and examined the impact of cardiac glycosides on myocardial energy metabolism of intact animals and in conditions of heart failure; she worked on the position of Dean Pediatric Faculty (1959-1962), Vice-Dean for Academic Affairs (1966-1967) in Kyiv Medical Institute. In scientific and educational activities she paid much attention to the introduction of scientific methods in the teaching of pharmacology. In studies N.M. Dmytrieva particular attention paid to the effect of cardiac glycosides on various aspects of energy metabolism in modeling pathological conditions of the cardiovascular system. Together with Academician O.I. Cherkes she was Director of Candidate’s dissertations of R.D. Samilova, N.O. Horchakova, I.F. Polyakova, K.I. Rubchynska.

Continuator the ideas of Academician O.I. Cherkes is his disciple, Doctor of Medical Sciences (1973), Professor (1976), laureate of State Prize (1986), Corresponding Member of National Academy of Sciences of Ukraine (1991), Corresponding Member of National Academy of Medical Sciences of Ukraine (1993), Honored Worker of Science and Technology (1999), Academician of the New York Academy of Sciences (1994), Ivan S. Chekman, who since 1972 is Head of the Department of Pharmacology.

Faculty staff has paid considerable attention to improving the teaching of Pharmacology and Clinical Pharmacology on the basis of achievements of pedagogic science. Department of Pharmacology is the principal in teaching and guiding work. This area of activities of the department was directed to:

Employees of the Department of Pharmacology and Clinical Pharmacology are members of the Ukrainian association of pharmacists and cardiologists, the editorial boards of numerous scientific journals and medical newspapers, academic councils on dissertation’s defense, State Expert Center of the Ministry of Health of Ukraine , they were awarded State Awards, take an active part in educational activities, often appear to radio and television and publish articles in newspapers, including “Vashe zdorov’ya”, “Natsionalny likar Ukrainy”.