The achievements of the Department of Surgery with a Course of Emergency and Vascular Surgery are widely known both in Ukraine and abroad. The staff of the Department constantly takes part in conferences and internships abroad.

Annually in December, within the framework of cooperation between the Bogomolets National Medical University and the Karolinska Institute (KI) there are visits of NMU representatives to the Karolinska Institute during which they discuss current projects and prospects for developing cooperation between medical universities. The Department of Surgery No. 4, now the Department of Surgery with a Course of Emergency and Vascular Surgery, participated in the NMU project and the first Head of the Department Professor Vladimir Mishalov and Assistant Andriy Dinets were the executors of the project. They identified a unique cohort of Ukrainian patients with medullary thyroid cancer whose clinical specimens are currently being used for research based on the Medical Genetics Research Unit of the Department of Oncology and Pathology at the Karolinska Cancer Center with the guidance of team leader Professor Katharina Larsson. Due to scientific cooperation, the studied cohort of patients was doubled with Ukrainian clinical material. A considerable amount of laboratory research is currently underway, preparation of the manuscript and journal definition (Scopus indexing, Thomson Reuters) for submission.

Thanks to scientific cooperation, the studied cohort of patients was doubled by Ukrainian clinical material. A significant amount of laboratory researches has now been completed, a manuscript and a journal definition (indexing in Scopus, Thomson Reuters) are being prepared for publication. 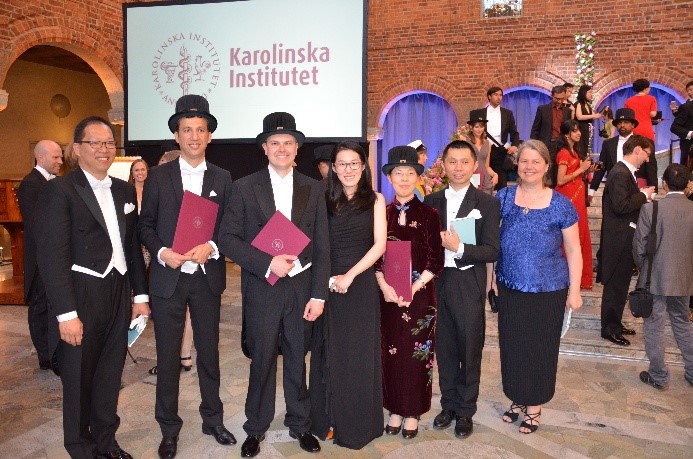 The delegation of the Bogomolets National Medical University visited one of the oldest universities in Europe – Jagiellonian University, Collegium Medicum (Krakow, Poland) in June 2-14, 2017. The department was represented by prof. Mishalov V.G., and Dean of the Faculty of Medicine No. 2 Assoc. Litvinova N.Yu. During the discussions, the results of previous work, current projects were summed up and the foundations of the following areas of cooperation were laid. Promising vectors of scientific research, the possibilities of conducting joint interdisciplinary research, as well as joint educational projects, were examined. For several years, mechanisms to improve the quality of the educational process have been intensively introduced at the Jagiellonian University, so special emphasis was placed on the introduction of joint programs that affect the improvement of the quality of education, the introduction of the latest pedagogical and innovative technologies. Internship programs for teachers, students, PhD degree applicants with NMU and Jagiellonian University were agreed. 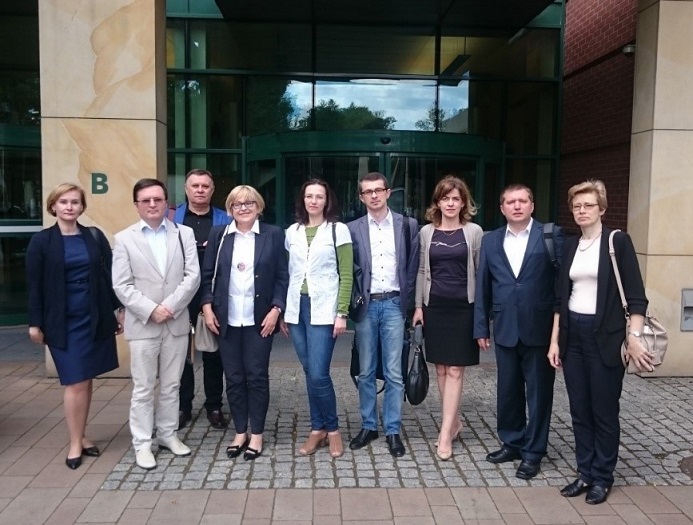 The staff of the Department of NMU in the Jagiellonian University, 2017.

Bogomolets National Medical University continues its postgraduate education cooperation with Independent Kazakh Agency for Quality in Education (Republic of Kazakhstan), in which experts of Bogomolets NMU take part in the work of expert groups formed by the Independent Kazakhstan Agency for Quality in Education (IKAQE). On September 5-7, 2016, the expert group conducted an external audit of the Kazakh Research Institute of Oncology and Radiology (KazRIOR), Almaty, Kazakhstan. The team leader and international expert of the IKAQE was invited by A. Donets, Ph.D., Head of the Research Department, Associate Professor of the Department of Surgery No. 4 of Bogomolets NMU.

The promotion of Bogomolets National Medical University in the world as the leading educational institution and involving foreign students is one of the main activities of the University.

On December 13-20, 2016, a working visit to the Lebanese Republic (Beirut, Zahla, Biblos) of the NMU delegation took place. The delegation consisted of Associate Professor of the Department, Ph.D. Leonid Markulan and Deputy Dean for Work with Foreign Students, Associate Professor of the Department of Therapeutic Dentistry, PhD Tatiana Timokhina together with Director of LLC “Studmir” Janina Tkachenko with the assistance of Dr. Shady Khatib. The program of the visit was prepared by Dr. Shady Khatib together with the Extraordinary and Authorized Ambassador of Ukraine in the Lebanese Republic Igor Ostash, agreed by the Rector of Bogomolets NMU.

On December 11, 2015, a seminar and an open practical session on surgery were held at the Department of Surgery # 4 of NMU (Clinical Site- Republican Clinical Hospital of the Ministry of Health of Ukraine). This event was initiated by the NMU management in accordance with the plan of integration of Ukraine into the European educational space and arrangements between the NMU and the Karolinska Institute (Sweden) in order to familiarize students and teachers with the method of teaching the discipline “Surgery” in the Bologna system.

September 28, 2017 in the morphological building of the Bogomolets National Medical University a meeting of the world-known plastic surgeon, a graduate of Harvard University Charles Hsu with the university community of NMU was organized with the assistance of Professor of the Department of Surgery №4 V. Khrapach. Charles Hsu gave a lecture on plastic surgery and talked about educating a doctor in the United States of America. The scientist shared his experience working at well-known clinics in America for aesthetic and cosmetic surgery, as well as for burn and reconstruction surgery. Lectures provoked lively discussion among the students, Charles Hsu answered all the questions. Also, the guest received a gift from the Department of Surgery # 4 – Ukrainian embroidered skirt.

August 12-13, 2017, a member of the Department of Surgery Officer No. 4 staff Andriy Dinets PhD was trained in Davos Course GI-Surgery surgery courses in Basel, Switzerland. The course was conducted within the framework of the 47th World Congress of Surgery (WCS 2017) and with the support of the World Association of Surgeons (ISS / SIC).

June 19-22, 2017 postgraduate student of the Department of Surgery # 4 of the Bogomolets National Medical University Olha Zakhartseva (Scientific Advisor – Professor Volodymyr Mishalov) has undergone an internship at the Plastic and Reconstructive Surgery Clinic “Akademikliniken” in Stockholm, Sweden which is stipulated by the PhD degree applicant’s right to academic mobility

In 2017 Associate Professor of the Department Koval and Assistant Mirgorodsky in 2017 undertook an internship at the Baltic Vein Clinic (Latvia, Riga, 2017) where they became acquainted with leading techniques for treating lower extremity vein diseases.

In 2018 Assoc. Koval undertook an internship at the Brudnovsky Hospital (SzpitalBródnowski) Vessel Clinic (Poland, Warsaw), where he became acquainted with enovascular and open methods of surgery on the arteries of the lower extremities.

Internship of Assoc. Koval in the Brudnovsky Hospital (Poland, Warsaw, 2018)

Starting from 2016 at the Department of Surgery # 4 students from many countries have been trained. They are attracted by the opportunity to work with patients as well as to work in the operating room and dressing rooms.

In September 2016, under the student exchange program between UMSA and SASA Foundation at the Bogomolets National Medical University five students from Warsaw Medical University (Poland) were trained.  Students undertook internships at the Department of Surgery No. 4 at the Main Military Clinical Hospital in Kyiv under the direction of Koval B.M., they were able to visit various departments, sort out difficult clinical cases, and assist in surgeries.

During September 2017, two students from Wroclaw Medical University – Bartosz Skonechniy and Eva Popovich – undertook internships at the Surgery Department # 4 of NMU. During the internship, Bartosz and Eva got acquainted with the organization of the surgical department (reception room, operating rooms, dressing rooms), the principles of patient registration, record keeping and storage, discharge from hospital. Students from the Wroclaw University of Medicine were able to master and improve the following practical skills and abilities: medical examination, diagnostic procedures, especially in emergencies, bandaging of wounds, suturing, desmurgy techniques.

Aninternship of Polish students in 2017.

Students from Italy in the operating room and endoscopic office.

From December 4 to December 28, 2017, a student from the University of Melbourne (Australia) Eric Justin de Tonnere received an internship at the Department of Surgery # 4 under the guidance of an Assistant Student Coordinator for Pavlo Byk’s Assistant Professor. Eric participated in the examination and treatment of patients, assisted during surgery such as vectomy, hernioplasty, and colectomy. A foreign student said that most of all, during his internship in Ukraine and NMU, he enjoyed the opportunity to participate in all manipulations, assisting the leading specialists of the Department and access to the patient’s bed.

From September 1 to September 30, 2019, a student of the 4th year of the University of Belgrade, Lupi Valerie, a Swiss citizen took part in the examination and treatment of patients at the Oleksandrivska Clinical Hospital and Institute of Cardiovascular Surgery n. a. M.M. Amosov.